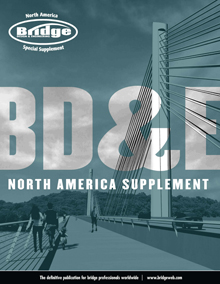 This publication was the first Bd&e supplement that was entirely devoted to the bridge design and construction market of the USA, Canada, and the rest of North America. It gives a flavour of some of the main projects, initiatives and issues that are influencing bridge construction and providing ongoing challenges for engineers in the region.

There is a big push in the industry to introduce new construction techniques that will enable bridges to be built much faster. Road closures can be kept to a very short window of just a couple of days or hours; in some cases bridges have been installed without the highway having to be closed at all. Meanwhile new approaches to maintenance, in assessing capacity and remaining lifetime of structures, or in the case of new materials and techniques, are offering engineers a more extensive toolbox in dealing with the problems of the ageing infrastructure.

As well as the ongoing tasks of building and maintaining structures to cope with increasing traffic, engineers have also had to address additional concerns in the last few years. Since 2001, new emphasis has been placed on securing major bridges against terrorist attack wherever possible, and designing new structures to make them less vulnerable to targeted damage.

And more recently, the issue of emergency preparedness was brought into sharp focus by hurricanes Ivan and Katrina, which caused serious damage to vital bridge connections on the Gulf coast. These events have prompted DOTs in the region to give careful consideration to the efficiency of their emergency preparedness plans, now extending this definition to include natural as well as man-made disasters.

New bridges in North America are now starting to be built using private financing – particularly in Canada, in provinces such as British Columbia where it has more or less become standard practice. Some of the US states are examining the possibilities, and draft legislation should make it easier for states to investigate this route. Meanwhile the increased use of design-build is bringing benefits for clients in terms of improved price-certainty and completion dates.

Our publication also includes a selection of sponsored company profiles, where you can find out more about the expertise and recent work carried out by our commercial partners. Many of the profiles include descriptions of ongoing projects in North America, and offer a valuable complement to the editorial section at the beginning of the magazine.

Not yet a subscriber?