BOTH bridge and tunnels are being considered for a new crossing in the centre of Genoa, northern Italy, as part of measures to reduce traffic congestion in the city. Engineering consultancy, High-Point Rendel, is to carry out a feasibility study, in association with the Symonds Group. The study will examine three options: a bridge over the port, a tunnel under it and a tunnel through the mountains that surround the city. Working in association with local specialists Aiati and Professor Del Grosso, the two British-based consultants will indicate to Genoa City Council the option which, in their opinion, provides the best prospect for relieving traffic congestion. The city centre is currently crossed west to east via two routes: urban roads alongside the port area and an elevated highway around the port. Options will be considered in terms of traffic flow, engineering feasibility, construction and operational cost, construction time scales, environmental impact and the possibility of attracting private sector financing. The study is due for completion this summer. The work in Genoa marks a return to the city for High-Point Rendel after almost 150 years. In 1853 the company's founder, James Meadows Rendel, completed a study and masterplan for the development of the port. 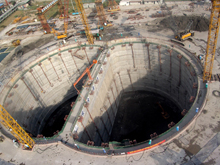