The governor of the US state of Maryland has announced US$765 million in funding for the new Harry W Nice Memorial Bridge.

Construction is due to begin in 2020, with completion expected in 2023, which is seven years sooner than originally planned. Maryland Transportation Authority (MDTA) anticipates advertising a design-build contract for the new bridge in 2018.

The new bridge will cross the Potomac River from Charles County, Maryland, to King George County, Virginia. It will be built north of and parallel to the existing 2.7km crossing and will include two lanes of traffic in each direction and a barrier-separated bicycle and pedestrian path.

The existing bridge has only one narrow lane in each direction, which causes near daily congestion and traffic issues. Routine maintenance and more major preservation efforts have significant traffic impacts. Without the construction of the replacement, the current bridge would have required a major rehabilitation project. It will be demolished once the new bridge opens.

“With this announcement, I am extremely proud to officially dedicate more than $760 million dollars to fully fund a new Potomac River bridge and finally replace the Governor Harry W Nice Memorial Bridge,” said governor Larry Hogan. “Marylanders deserve better than the daily congestion caused by the current bridge and with the construction of this new bridge, they will finally get it.”

Last year, the Board of Public Works had approved a US$15 million contract for preliminary design and engineering of the replacement bridge in 2015. In addition, Hogan’s administration has allocated over US$61 million toward the bridge in its transport programme for 2017-2022. Using this funding, MDTA has begun preliminary work, including environmental studies, site investigation, right-of-way acquisition and preliminary engineering design.

MDTA has been able to reduce the initial US$1 billion price tag of the project by more than US$200 million. “By right-sizing the bridge design, we’re able to deliver an affordable new bridge and do it years sooner,” said transportation secretary and MDTA chairman Pete K Rahn. 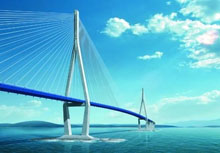