Oldham Council in the north-west of England has submitted the planning application for 140m-long weathering steel bridge across the Medlock Valley.

The US$6 million bridge for cyclists and pedestrians would be built in Park Bridge, along an old viaduct route on the Oldham/Ashton boundary.

The council hopes to secure funding for the bridge’s construction from Greater Manchester’s Challenge Fund for Active Travel.

If everything goes to plan the bridge – which would be more than 30m above the ground at its highest point – could open within the next couple of years, said the council. 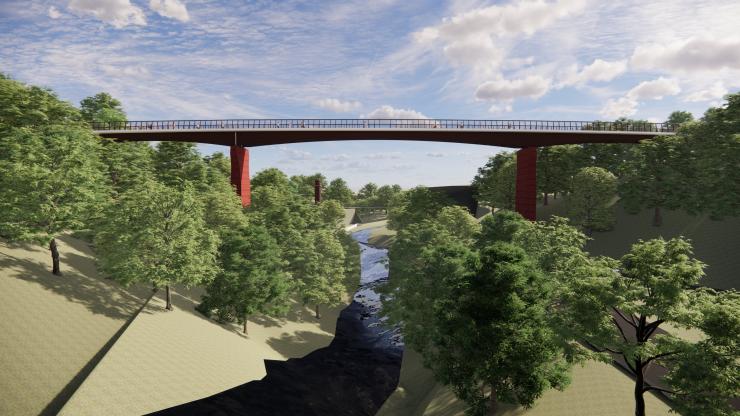 The structure would provide a new southern access point to the Northern Roots urban farm and country park, as well as improving connections between Oldham and the rest of Greater Manchester.

It is a steel girder structure that would weather in time for an industrial look designed to fit in with the area’s heritage. The completed project would also include landscaping work in keeping with the area.

Councillor Amanda Chadderton, leader of Oldham Council, said: “Oldham Council is working to provide safer and better transport links for our residents. We want to make it easier for people to access employment and training opportunities in other areas, while also getting out and enjoying what the borough has to offer.

“We’d like to thank everyone who took part in the consultation exercise and your views have helped get us to the planning stage.”

Oldham Council staff have been working with Transport for Greater Manchester (TfGM) and Tameside Council on the bridge proposal.

Consultants working on the project include Aecom, Wilde and Unity Partnership.