An Arup bridge engineer is one of five recipients of major awards given last night by the UK-based Royal Academy of Engineering.

All five are winners of the new RAEng Engineers Trust Young Engineer of the Year competition, which was supported by the Worshipful Company of Engineers. The five prizes of £3,000 are presented to early-career engineers whose achievements are recognised as outstanding.

Arup senior engineer John Collins was described as one of the youngest top suspension bridge engineers in the country; he has worked on complex projects on both the Humber Bridge and Forth Road Bridge. He graduated from Durham University and joined Arup in 2007, becoming a chartered engineer just three years after graduating.

Collins played a key role when a fracture occurred in the Forth Road Bridge, working on the repair of the truss end link as well as monitoring and interpreting instrumentation during the load tests. The bridge re-opened to traffic ahead of schedule, and he remains involved with the project.

For his work on the complex scheme to replace the main span bearings of Humber Bridge, Collins received the Institution of Engineering & Technology’s Sir Henry Royce Medal for Young Professionals in 2012. The project later won an award from the Yorkshire & Humber region of the Institution of Civil Engineers.

The overall winner of the Young Engineer of the Year awards, Dr Sithamparanathan Sabesan, received the Sir George Macfarlane Medal for his work in the area of accurate battery-free radio frequency identification (RFID) tag tracking. The other award winners have worked on what makes lithium ion batteries explode, new alloys for the nuclear industry and 3D audio systems for cars.

Awards were presented by engineer, author and broadcaster Roma Agrawal, who said: “I’m delighted to present these exciting and important awards to five engineers who are a real inspiration both to younger engineers and to students who might be considering engineering as a career. They are each pioneers in their fields, driving change and innovation and leading critical projects across the profession." 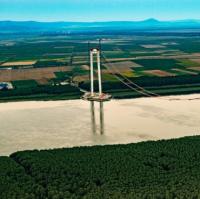