I don’t often experience a frisson of excitement when a review book lands on the desk, but books like this don’t come along often. As a long-time admirer of Laurent Ney, and a fan of his bridge creations, I hoped that this would be something to savour – and I was not disappointed.

While Ney is not formally acknowledged as the author of the book – true to the spirit of how he works, it is attributed to the practice as a whole – the philosophies, thoughts, inspirations and opinions are undoubtedly his. Whether they are expressed by him directly, or filtered through and influenced by his colleagues and students is in my opinion irrelevant. What counts is that the book delivers them clearly, succinctly and without unnecessary frippery.

The latter point is particularly relevant in a publication in which the full text is reproduced in both French and English. Both the layout and the quality of translation are to be commended – throughout the main chapters, the two texts run side by side, hence relating text to the relevant illustrations is no chore, and the English reads as smoothly as I assume does the French.

If you are looking for a catalogue of Ney creations, this is not it. The book covers around 20 footbridge projects, each chosen to illustrate a particular design challenge, a way of working, or a thought process, and in each case the steps that were followed and the decisions taken are described in detail, with reasoning and influences made explicit. For as Ney states in his introduction, making an observation on the all-too-common approach of simply adapting a typography to suit a location: ‘a bridge has to be designed!’

Chapter sub-headings consider ‘a dialogue with history’, ‘an integral bridge’ and ‘towards a subtractive process’ for example, with case studies ranging from Tintagel in the UK, via mainland Europe, to Dejima in Japan. The book is generously illustrated with photography, sketches, and engineering drawings, but while the influence of technical considerations is discussed in the text, it does not dominate.

The factors that can too often be consigned to afterthoughts – amenity, user experience, setting, history and so on – are just as prominent in Ney’s creative process, and he effortlessly expresses notions that might sound whimsical elsewhere. On the Lichtenlijn Footbridge in Knokke, he observes: “The point at which the bridge meets the ground is a special moment from an architectural point of view: it’s where it all happens, where the bridge becomes a bridge, and the difference between the ground and the air is established.”

In a short review it’s difficult to do justice to this book; it should figure high on the ‘must-read’ list for all bridge designers so my best advice would be to make up your own mind. 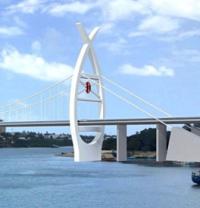