Senators in the US state of California will hold a meeting tomorrow (24 January) to discuss a report into lessons that could be learned from the development and construction of the Bay Bridge.

Among the recommendations is that public employees should have a secure place to bring their concerns, complaints, and above all their safety issues. The report includes comments from experienced people working on the project who said that their concerns about quality were dismissed, with one claiming that Caltrans supervisors told him he was being "too rigorous" in his findings.

The discussion on the eastern span of the San Francisco-Oakland Bay Bridge is the second in a series of informational hearings examining delays and budget increases in the project. The focus of the hearing is to identify opportunities to improve the state’s development and delivery of large infrastructure projects.

The committee hired an investigative reporter, Roland De Wolk, to produce a comprehensive timeline and review from the Loma Prieta earthquake to the new span’s opening in September of 2013.

Friday's hearing will begin with the findings of the report, and will be followed by background on the project and input from witnesses. The Senate committee said that "all these witnesses will raise questions of construction quality that have gone generally unanswered and may never be adequately resolved because of the project’s lack of transparency and accountability". 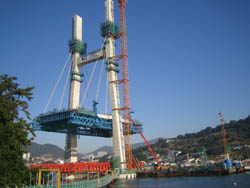