The first 500-tonne span has been installed for the new structure to replace the bridge that collapsed last year in Genoa, Italy, killing 43 people.

The 50m-long section was lifted about 50m above the ground by two cranes that had been used to dismantle the failed Morandi Bridge. A further 18 of the deck sections will be lifted during the coming months. 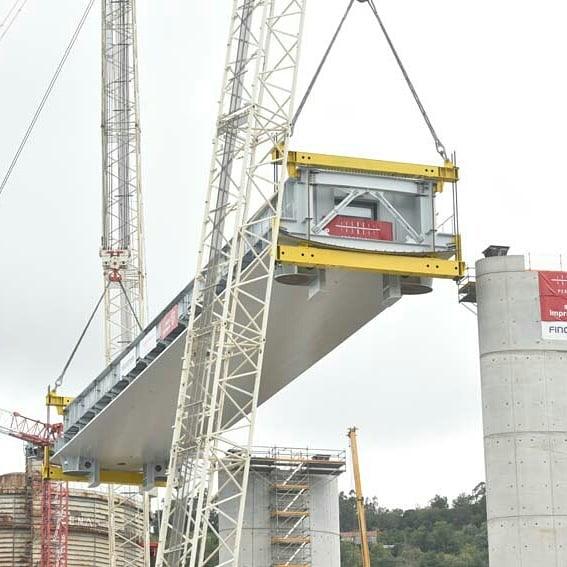 The new bridge is being built by Pergenova, a joint venture of Salini Impregilo and Fincantieri Infrastructure.

The event was held in the presence of company representatives as well as officials including Italy’s prime minister Giuseppe Conte. The bridge’s designer, Renzo Piano, also took part.

“We have kept a promise made less than twelve months ago,” said Giuseppe Bono, CEO of Fincantieri. “That is, to work well, and to work quickly. We have made it as an act of gratitude for a city we consider home, we are a Genoese company, and we have this land in our DNA.”

He added that the whole of Italy is working on the bridge, with steel coming from around Italy and over 1,000 people involved in the project, including technicians, engineers and workers from all over the country.

“We are dealing with a highly symbolic work produced by a spirit of collective initiative,” said Salini Impregillo CEO Pietro Salini. He hoped that the collaboration involved hoped that it could be used as a model for restarting infrastructure work in the rest of the country. “This is considered the country of blocked construction sites, we have 36 billion euros in works blocked in Italy – this means having jobs, development, growth of young people blocked as well. Yet, this work shows that infrastructures can be built in Italy. And that they can be done quickly and transparently, while maintaining a very high quality standard. Therefore, Genoa has become a symbol and a precedent for the rest of the country.”