Washington governor Chris Gregoire and Oregon governor John Kitzhaber have announced their plan to seek funding for a deck truss bridge for the Columbia River Crossing project.  The aim is to break ground in 2013.

The original plan had been for an open web box/composite truss design.

The US states are seeking nearly U$1.3 billion in federal funding for the project. “We must secure a federal record of decision on our design this year to ensure the best chance of receiving full funding,” said Gregoire.

The two governors identified a deck truss bridge design as the best replacement structure for the aging Interstate 5 bridge because they said it provides the most certain path to keep the project on schedule and on budget. The other bridge options under consideration would require delays for additional design work and environmental analysis, which would add time and cost to the process, they said.

The governors cited three key factors influencing their decision to move forward with a deck truss bridge:
• Reducing and eliminating risks to schedule and budget. In all key areas that determine risk – schedule, design, construction, procurement, cost growth and construction claims – the deck truss performs better than the cable stayed bridge type, they said. It also is the least likely to require a supplemental draft environmental impact statement because its environmental impacts and footprint closely resemble the previously studied bridge type.
• Affordability. The deck truss is likely the most affordable of the three bridge types because it is the least costly, the most likely to meet schedule, the easiest bridge to build and will attract the most competitive bids, they said.
• Securing funding. A delay in securing the federal record of decision creates significant risks of missing or delaying federal funding opportunities. The project is seeking US$400 million in federal highway discretionary funding as well as US$850 million in Federal Transit Administration New Starts funding.

Next steps for this year include updating project cost estimates to incorporate deck truss design, adding one or more architects to the project team and establishing architectural specifications, working to publish the final environmental impact statement and receiving the federal record of decision. 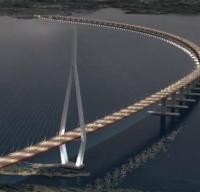