Data collected from the accelerometers of mobile phones could help evaluate the structural integrity of bridges and increase the lifespan of structures, according to new research.

The study involving researchers at Massachusetts Institute of Technology (MIT) in the USA found that mobile phones equipped with special software can collect useful data while placed in vehicles crossing bridges. In so doing, they could become a less expensive alternative to sets of sensors attached to bridges themselves, suggested the researchers.

“The core finding is that information about structural health of bridges can be extracted from smartphone-collected accelerometer data,” said Carlo Ratti, director of the MIT Sensable City Laboratory and co-author of a new paper summarising the study’s findings.

To conduct the study, the researchers developed an Android-based mobile phone application to collect accelerometer data when the devices were placed in vehicles passing over the bridge. They could then see how well those data matched up with data record by sensors on bridges themselves, to see if the mobile-phone method worked.

The research was conducted, in part, on the Golden Gate Bridge in San Francisco. 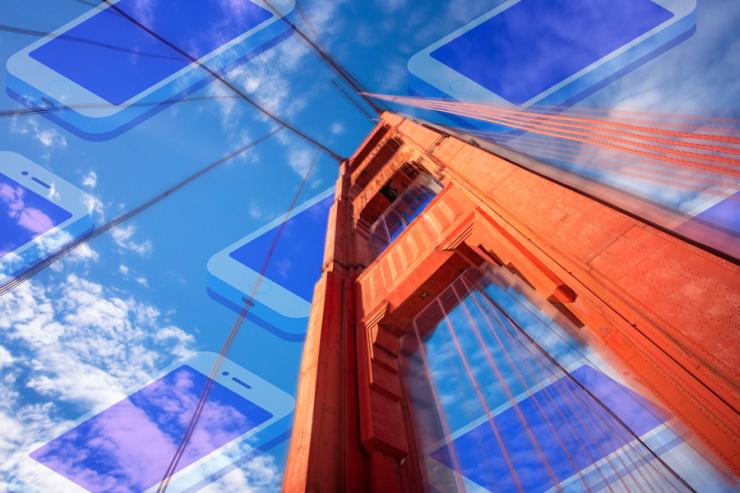 The study showed that mobile devices can capture the same kind of information about bridge vibrations that stationary sensors compile. The researchers also estimate that, depending on the age of a road bridge, mobile-device monitoring could add from 15% to 30% more years to the structure’s lifespan.

“These results suggest that massive and inexpensive datasets collected by smartphones could play an important role in monitoring the health of existing transportation infrastructure,” the authors write in their new paper.

The study, ‘Crowdsourcing Bridge Vital Signs with Smartphone Vehicle Trips’, is being published in Communications Engineering.

“In our work, we designed a methodology for extracting modal vibration frequencies from noisy data collected from smartphones,” Santi said. “As data from multiple trips over a bridge are recorded, noise generated by engine, suspension and traffic vibrations, [and] asphalt, tend to cancel out, while the underlying dominant frequencies emerge.”

In the case of the Golden Gate Bridge, the researchers drove over the bridge 102 times with their devices running, and the team used 72 trips by Uber drivers with activated phones as well. The team then compared the resulting data to that from a group of 240 sensors that had been placed on the Golden Gate Bridge for three months.

The outcome was that the data from the phones converged with that from the bridge’s sensors; for 10 particular types of low-frequency vibrations engineers measure on the bridge, there was a close match, and in five cases, there was no discrepancy between the methods at all.

“We were able to show that many of these frequencies correspond very accurately to the prominent modal frequencies of the bridge,” Santi said.

The researchers also examined how well their method would fare on other types of bridges. They studied a bridge in Ciampino, Italy, comparing 280 vehicle trips over the bridge to six sensors that had been placed on the bridge for seven months. Here, the researchers were also encouraged by the findings, though they found up to a 2.3% divergence between methods for certain modal frequencies over all 280 trips, and a 5.5% divergence over a smaller sample. That suggests a larger volume of trips could yield more useful data, they said.

“Our initial results suggest that only a [modest amount] of trips over the span of a few weeks are sufficient to obtain useful information about bridge modal frequencies,” Santi said.

Looking at the method as a whole, Buehler said: “Vibrational signatures are emerging as a powerful tool to assess properties of large and complex systems, ranging from viral properties of pathogens to structural integrity of bridges as shown in this study. It’s a universal signal found widely in the natural and built environment that we’re just now beginning to explore as a diagnostic and generative tool in engineering.”

“We still have work to do, but we believe that our approach could be scaled up easily — all the way to the level of an entire country,” Ratti said. “It might not reach the accuracy that one can get using fixed sensors installed on a bridge, but it could become a very interesting early-warning system. Small anomalies could then suggest when to carry out further analyses.”