The bridge that stands as a symbolic entry to Washington DC  needs a major overhaul or it will have to be closed in 2021, according to the US National Park Service.

An inspection by the Federal Highway Administration last month found that deterioration has accelerated since a 2015 inspection. Repair and renovation costs are estimated at US$250 million. The National Park Service has spent nearly US$10 million on temporary repairs since 2010 with another US$5 million emergency repair due to start late this year.

“Memorial Bridge is a significant example of the immediate challenges we are facing across the national park system to repair and maintain roads, bridges, and other essential transportation systems that not only connect people to the parks, but that also can be part of people’s daily commutes,” said NPS director Jonathan Jarvis.

Nationwide, NPS has US$11.9 billion of deferred maintenance projects – maintenance that has been put off for one year or more because of a lack of funds. Of this total, slightly more than half is deferred transportation maintenance. The NPS portfolio includes more than 1,400 bridges. 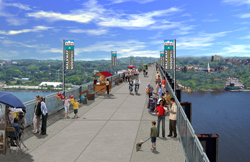