Funding has been approved for construction of a US$126 million new bridge - including an underslung pedestrian path – alongside the existing crossing of the Peace River in Canada.

The governments of Canada and the province of Alberta have agreed to build a second bridge to accommodate westbound traffic. Once completed, the existing bridge will be used solely for eastbound traffic.

Funding will also go towards constructing an underslung pedestrian bridge, which will allow pedestrians to cross over the Peace River while being separated from highway traffic and be partially sheltered from the elements and highway traffic noise.

Peace River member of the Legislative Assembly Debbie Jabbour said: “In 2018 we will celebrate the 50th Anniversary of the opening of the Peace River Bridge. As the economy of the town and region have grown, transportation has become a critical component of the area's continued growth. We welcome the twinning of the bridge and the opportunities it represents, not only in terms of construction jobs but also its role as an essential link for the area. The new bridge will increase not only emergency access for all residents but also provide a vital transportation corridor to facilitate development in the north.” 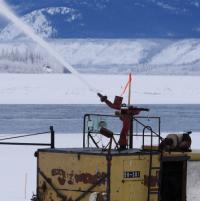