A new deck is being poured on the John F Kennedy Memorial Bridge as part of the work on the Downtown Crossing portion of the Louisville – Southern Indiana Ohio River Bridges Project in the USA. 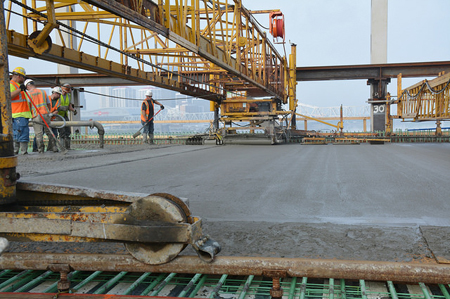 Demolition work started in December, right after I-65 South traffic moved to the new Abraham Lincoln Bridge. Crews removed the old deck and old steel, and have spent the past several months installing new steel on the west side of the bridge.

The new floor system is being built on top of existing floor beams, with all new stringers, bearings and diaphragms the length of the Kennedy Bridge. After putting in new stringers, crews installed stay-in-place metal decking and added reinforcing steel before pouring the concrete.

A new approach on I-65 South (Indiana approach) is also being built, with complete removal of the existing approach.

The Kennedy Bridge is expected to remain closed to traffic until late October. When it opens in October, it will carry two through lanes of southbound traffic. Access will also be restored from I-65 South to I-64 West, I-64 East and I-71 North.