Work on the suspension elements follows the removal of the entire timber decking of the 200-year-old bridge, which links England and Scotland, as part of an essential programme of works to preserve the iconic structure.

The bridge, which has a single span of 137m crossing the River Tweed from Horncliffe in Northumberland to Fishwick in Berwickshire, was the longest wrought iron suspension bridge in the world when it opened in 1820.

Spencer Group has been appointed by Northumberland County Council to dismantle the bridge and carry out a complete refurbishment and rebuild.

Some 700m2 of timber bridge decking has been removed using a bespoke overhead cable crane and access platform, meaning work from beneath the bridge on the River Tweed was not necessary. Had it been, the project would have been delayed by recent high tides.

Joe DiMauro, Project Manager for Spencer Group, said, “The development of systems to enable our operatives to work above the bridge, rather than below it from the water, was a key feature of our submission in the tender process.

“It has proved to have been an excellent move, as we would otherwise have now been behind schedule due to the recent high tides.”

A key element of the project is a commitment to ensure all modifications are in keeping with the historical significance of the bridge, including restoring, rather than replacing, the suspension chains where possible.

The old decking will be replaced using timber sustainably sourced from managed woodland while the existing masonry towers are being restored using sandstone from the same Hutton Quarry as used originally.

A blasting and painting facility has been established on site, where all elements will be cleaned and restored to their original strength, wherever possible. Every link and chain that can be repaired will be specifically returned to its original place.

Once the bridge is completely down, the original English and Scottish anchorages will be removed and replaced. This will involve working from a bespoke steel access tower on the English side and deep excavations on the Scottish side.

The US$13.7-million project was launched in October last year, with the structure to remained closed during works until 2022.

Robert Hunter, Chair of the Friends of the Union Chain Bridge group, which formed in 2014 and has more than 700 members, said, “The bridge hasn’t been seen like this before, certainly not in living memory, and it’s a quite remarkable sight. It’s a great relief to us that the bridge is being restored, as we could have been witnessing it being dismantled for good." 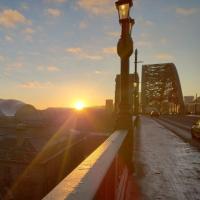