The French transport ministry has said that work is in hand to upgrade the two major bridges on its highway network that are in the most urgent need of repair.

The ministry has published information about the condition and maintenance of the largest bridges on the network. The lists – split to include ones operated directly by the government or under concessions - include about 160 bridges; the ministry has said that the scope will be progressively expanded. Overall, the network includes about 24,000 bridges.

The bridges listed are subject to at least one detailed inspection each year and a full audit every three years. A tool is used to indicate the level of necessary repairs and their degree of urgency.

Two bridges were classified as ‘3U’, indicating that urgent repair work is required. The Caronte Viaduct has already been the subject of work, which is continuing. An expert committee has already raised the classification to a higher value than the one indicated on the list. The Echinghen Viaduct – which is only 20 years old - had initial permanent repair work carried out in the autumn 2017 and additional work is currently scheduled. All work should be completed by the end of 2019, said the ministry.

About two dozen other bridges are classed as ‘3’, the next most severe rating.

The world-famous Millau Viaduct and Pont de Normandie were described as being in very good condition. 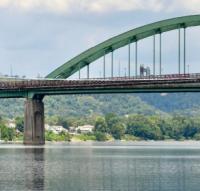