The government of Canada has announced that it will invest in major rehabilitation of the Victoria Bridge in Montréal.

Victoria Bridge is a strategic link between Montréal and the South Shore, connecting the city directly to Saint-Lambert.

Minister of transport Omar Alghabra has announced a contribution agreement with transport and logistics company CN to carry out the rehabilitation. The agreed contribution is worth nearly US$12 million over three years

CN owns and operates the bridge, which was originally built as a railway bridge in 1854 and then adapted in 1898 to accommodate road traffic. It remains primarily a railway bridge but operation for road vehicle traffic is maintained under an agreement between CN and Transport Canada.

The work is needed to maintain the bridge’s safety and improve access for road vehicles. The project aims to repair structural elements of the roadway portion of the bridge and to optimise road signage.

“The Victoria Bridge is an essential link between the South Shore and the Island of Montréal,” said  Alexandra Mendès, the member of Parliament for Brossard–Saint-Lambert. “The investment announced today will ensure a steady flow of people and goods while maintaining the long-term safety of those who use the bridge’s roadway.”

“We are very pleased to be working with the government of Canada on this important investment,” said Sean Finn, CN executive vice-president, corporate services, and chief legal officer. “The Victoria Bridge was the first bridge to connect Montreal and the South Shore and remains a critical trade-enabling infrastructure that facilitates the flow of goods and commuters and it is an essential link in the North American economy. Safety is a core value at CN, and this investment will help ensure the longevity of the road portion of the bridge.”

US rail authority opens up access to bridge information 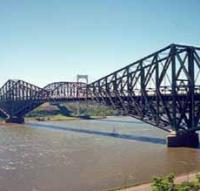 US rail authority opens up access to bridge information