A new software system for asset management that draws on the expertise of those who operate and maintain Denmark’s largest fixed links is being launched. Helena Russell finds out more. 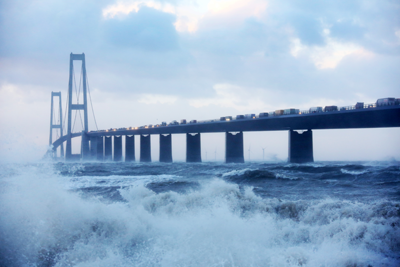 As the transport infrastructure sector starts to embrace the concept of predictive or condition-based maintenance, the challenge of implementing such a fundamental change in management procedures is no doubt giving owners pause for thought. Questions, such as how to manage the volume of data generated, how to ensure that existing service-history records can be incorporated so that stock condition can be accurately assessed, and how to establish the appropriate triggers for carrying out maintenance, are likely to be some of the issues taxing asset managers

But November 2019 saw the launch of a new asset management program that has been developed by IBM over a two-year period in collaboration with Storebælt and Öresund operator Sund & Bælt. The software is likely to attract a great deal of interest from those coming to terms with the task ahead.

According to IBM, Maximo for Civil Infrastructure will offer industry and task-specific functionality to assist infrastructure owners in managing, monitoring and operating their assets effectively. It is intended to bring together data from a wide range of sources – not just maintenance and design details, but also near real-time information from structural sensors, wearables from maintenance staff, stationary cameras and drones, as well as environmental and climate data, to help bridge owners identify and measure the impact of damage, such as cracks and corrosion, and loadings, vibrations and stress on their structures.

Executive director of asset management Bjarne Jørgensen explains that the idea to create an asset management product specifically for the civil infrastructure market came about when Sund & Bælt Holdings was reviewing its own operating procedures and considering how it could improve further. “We wanted to move to the next level of operational excellence; while we believed that we were doing very well already, we realised that if we wanted to stay in the same position – as the company chosen to build and operate major infrastructure schemes – we needed to demonstrate to our stakeholders that we were doing things in a proper and qualitative way,” he says.

“The most obvious improvement was to move from time-based maintenance to predictive maintenance, and it became clear that we needed to update our basic system to make better use of all the data we are gathering and develop it into some kind of health monitoring system,” he continues. 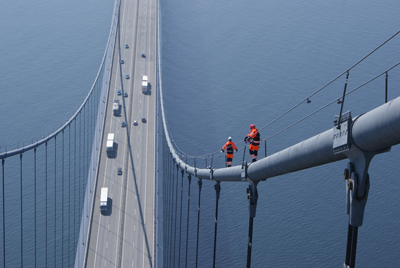 Sund & Bælt was already using IBM’s standard Maximo solution for asset management across the Storebælt fixed link – all the maintenance, inspection, repair work and so on was managed by the system from the very beginning, Jørgensen confirms. “But to introduce the new functionality that was needed essentially required a major upgrade of the system – moving it on to a new platform that could support artificial intelligence, the Internet of Things, and all those digital solutions,” he says. “During that preparatory work, we realised that many infrastructure owners and operators like us don’t have a system to actively facilitate this kind of management and maintenance. Such systems exist in the aircraft maintenance sector, and you have it in the offshore wind farm industry, but there is nothing similar within bridges, tunnels and large civils infrastructure,” he adds.

IBM sales director Boy Steiner takes up the story: “We worked with Sund & Bælt in terms of getting the Maximo environment correct, starting with a blueprint to create the ‘best standard’ solution. But, while we were doing it, they asked if it would be possible to create a solution that others could get the benefit of, to gain all the templates and knowledge and so on. If you have a bridge like Storebælt – although of course there are not so many like this – you will be able to take the system, configure and implement it and just run with it. Of course, it’s not possible to just take it out of the box and run it, but we wanted it to be at such a level that made it possible to use perhaps 65% or 70% and only have to configure the remainder.”

Significantly, they also established that there were other infrastructure operators who were interested in such a product, so the two agreed to collaborate to develop a tailormade system for transport infrastructure.

“The reason for this was that we don’t see anything similar on the market to date, nor do we see bridges around using anything like it,” explains Steiner. “At the same time, you can see a lot of issues coming up with bridges in Europe – the Morandi bridge in Genoa as an example – and we also see a lot of badly maintained bridges not just in Europe but in the US too.”

Jørgensen continues, “We know that our colleagues in Japan at the Honshu-Shikoku Expressway are doing something in the same direction, and also Amey on the Forth bridges in Scotland – but we believe we are the first to develop something for the open market.”

He says there has already been interest from public operators in Europe and notes that in some sectors this kind of structured way of doing maintenance is more necessary than in others. “Pavements and asphalt are in pretty good hands, there is very good knowledge already about how to handle that,” he says. “But when it comes to the bridges and other structures, we think this area is a bit behind.

“The strategy in this sector can be very different,” he goes on. “At one extreme there are the operators that build highway bridges then let them sit there till they break down. On the other extreme are those who provide very detailed instructions for how to build, operate, maintain and so on so that it lasts as long as possible. And there is everything in between. Certainly, in some cases the operator is just taking care of what the customer can see.”

The know-how that Jørgensen and his colleagues have built up over more than two decades of managing these major infrastructure links is a valuable commodity and one that they are regularly called upon to share with others. “Up to now we have been selling advice and man-hours to the market,” says Jørgensen. “We wanted to continue to share our knowledge with the market, but rather than selling hours on an individual basis, we have put it into this new system.”

“This includes how to arrange your assets in hierarchies; how to combine geo-location with the asset structure; also how to manage all your assets as, so to say, an ‘ecosystem’. What we can also offer are all the techniques we have developed over the last 20 years – instructions for how to maintain, operate and overhaul assets so that they will last as long as possible, in the cheapest way.

“We are looking at the overall cost of management, so if we see that it’s better to do more preventative maintenance to prolong the lifetime, then we will do that,” continues Jørgensen. “We also need a system that can keep track of all the data that we are collecting. Now, for example, we have a ‘digital twin’ of the structure – we can see each asset as a dot on the map, we can click on it and find out how much has it cost during its lifetime, when was it last overhauled, who did it, what was wrong with it, what is the purpose of it, what operational hours it has and so on. All that data is gathered through Maximo and shown on a GIS map, so it’s easy for our maintenance people to have this information to hand.”

Although the system has been built around Sund & Bælt’s large-scale suspension and cable-stayed bridges, when broken down into elements, they have a lot of similarities with other structures – bearings, joints, piers and so on.

“The system will be suitable for large projects in the first case,” says Jørgensen. “It is easily adaptable to other large crossings and fixed links, but even smaller bridges can benefit from it. Right now we are adding highway bridges that just cross roads, or carry the road across a river,” he adds. All the basic details such as how to structure the assets, how to acquire, handle and store the data is similar, even when the bridges are different, Jørgensen says. “Of course it can’t be a standard system to fit all operators, because all bridges are different,” he admits. “But the entrance barrier for someone coming into this system would be lower than if they were starting from scratch.”

Operators of existing fixed links may have to retrofit some of the important areas with new sensors in order to use the system – and this was done on Storebælt, Jørgensen confirms. But the team also found a way to incorporate handwritten rail maintenance records into the system using natural language processing, enabling them to take the service history back a lot further. “With new technology, we found we could incorporate all our work orders from the last 20 years, and feed it into the predictive maintenance procedure.”

The new system has add-ons such as health monitoring, artificial algorithms that can analyse data and so on. “There are lots of overhaul and maintenance systems out there, but they are not aimed at infrastructure operators and managers,” says Jørgensen. 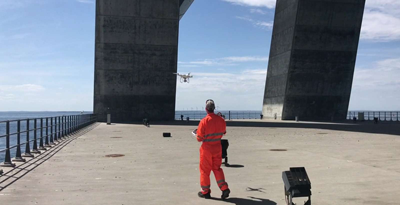 “If it’s the same type of data that you are gathering, then you have the basic system that you can fit with something like ours. For example, we have sensors on our hangers – they move in the wind and also when there are heavy loads on the bridge. We measure the movements, so we can make a model to predict when the steel in that hanger will get fatigued, and when it will break. We measure the actual movement of each hanger, and calculate when we need to go out there and exchange it before it breaks.”

With the system in use now, Sund & Bælt is beginning to reap the benefits, Jørgensen says. “We are starting to see savings as predictive maintenance is far cheaper than time-based maintenance. Much of the work we do on a structure like this is inspection work and gathering data. Instead of having to send people out to do this, we now have more sensors, even drones and so on, and we get more accurate data and with greater frequency.”

“For customers, this will be a service solution in the cloud,” explains Steiner. “This means you don’t have to make a huge investment in software and so on – you can start with just a few licences and so it is accessible even for small companies. They will be able to buy either the full solution or just the service – in the latter case you pay per use. It is still under discussion as to how this will be charged, but it will depend on the level of use,” he confirms.

Owners and operators of large bridges are certainly target customers, but Steiner reveals that he is also having discussions with highways departments and ministries: “They are looking at how they can have the whole infrastructure managed in a more cost-efficient way,” he says. “It’s not just roads and not just bridges – in fact, it is all elements of civils infrastructure in all parts of these countries. There is a huge issue about how to properly manage them.”

The first version officially launched at the end of 2019 was for bridges similar to Storebælt. Version two of the software will be launched in the first quarter of 2020 and is planned to add management of steel bridges, with content continuing to be extended on subsequent releases.

This article was first published in Bd&e issue 97. To find out more about subscribing to Bd&e, click here. 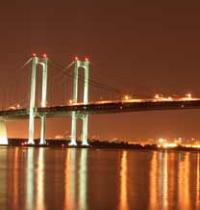