Gwynedd Council in Wales has said that news of a delay of a few months in the planned opening of the Pont Briwet road bridge has come as a blow.

The rail section of the challenging project has been completed, with passenger trains beginning operation today. “However, we anticipate that there will be a delay in opening the road bridge as Hochtief UK, the contractors, have reported that there is still a significant amount of work to complete on site,” said the council. “In March it was said that not building a temporary road would enable contractors to open the road earlier than originally anticipated, so this news comes a blow to us.”

Completion is now expected in spring of 2015, which is when opening of the new road bridge had originally been scheduled.

The contractor is encountering problems with the transfer of the water main and other services to the new rail bridge, said the council. This must be completed before the old bridge can be demolished and work starts on the new road bridge.

It had been intended that the existing bridge would be used until the new rail bridge was completed and then temporary decking placed alongside the railway to provide a single lane access for vehicles. However, in November 2013 it was necessary to close the existing railway line following settlement of the old bridge and by January 2014 the road bridge has also deteriorated and had to be closed for safety reasons. 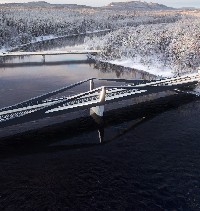