Installation of a monitoring system could enable Cleveland Bridge in south-west England to be reopened to all traffic following repairs, says a new engineering report.

Bath & North East Somerset Council commissioned WSP to produce the detailed independent report, which found that a monitoring system would be a reasonable, precautionary measure to allow the bridge to reopen.

The report recommends a staged approach to opening of the bridge. Initially the 18-tonne temporary load restriction would remain and if the monitoring showed there were no issues the bridge could open to normal traffic loads of 44 tonnes. A passive support system would be designed to provide longer term surety.

Engineers have carried out a careful and detailed assessments, as well as further computer modelling, following the discovery of unexpected corrosion in hanger bars at the start of year, said the council. More recent accurate information on the degree of section loss to the worst affected group of bars has become available using castings of the bars.

Now engineers have recommended the use of a monitoring system to provide ongoing confidence that bridge remains safe once brought back into service.

The report says an intelligent monitoring system could be deployed relatively quickly and allow the structure to be brought back into service following a brief, initial period of monitoring under test loads.

And it says using the monitoring system would provide early detection of the onset of changes in the characteristic ‘fingerprint’ response of the structure and enable the introduction of control measures to ensure public safety in a considered, timely and measured way.

Councillor Manda Rigby, cabinet member for transport, said: “Safety remains our number one priority. As the renovation of the bridge progressed, and previously unknown issues like the hangar bars have challenged the renovation, we have followed expert advice from independent engineers.

“The latest report before us by independent bridge engineers recommends using a monitoring system to allow the bridge to be safely brought back into service as quickly as possible, this option is being progressed with the aim of opening the bridge to two-way traffic by late September/early October.”

The severe corrosion on the Grade II* listed structure was revealed when sections of concrete were removed from the hanger bars, which support the main trusses of the 200-year-old bridge.

An engineering report produced by WSP in April set out the challenges to repair the sections and recommended subsequent careful detailed assessment and computer modelling to assess the option of putting a bearing under the truss to support the weight of the bridge.

While the assessments have been carried out other works have continued with main concrete repairs to the deck and trusses. Scaffolding on the bridge will start to be removed this month. 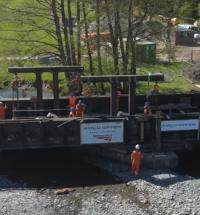 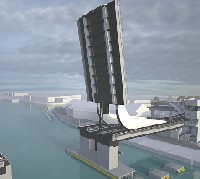 Work gets under way on East Anglian bridges