Researchers at the University of Canterbury (UC) in New Zealand have developed a design of bridge that they claim would yield little to no damage if hit by a strong earthquake.

After the Canterbury and Kaikoura earthquakes, there has been increased interest in creating more earthquake-resilient bridge infrastructure in New Zealand. In response, researchers at UC have developed their low-damage solution for bridges.

The research is being led by UC civil engineering PhD student and chartered bridge engineer Sabina Piras, under the supervision of Professor Alessandro Palermo and Associate Professor Gabriele Chiaro. The team has developed an alternative earthquake-resilient solution, also referred to as ‘low-damage’, for designing and building bridge infrastructure. 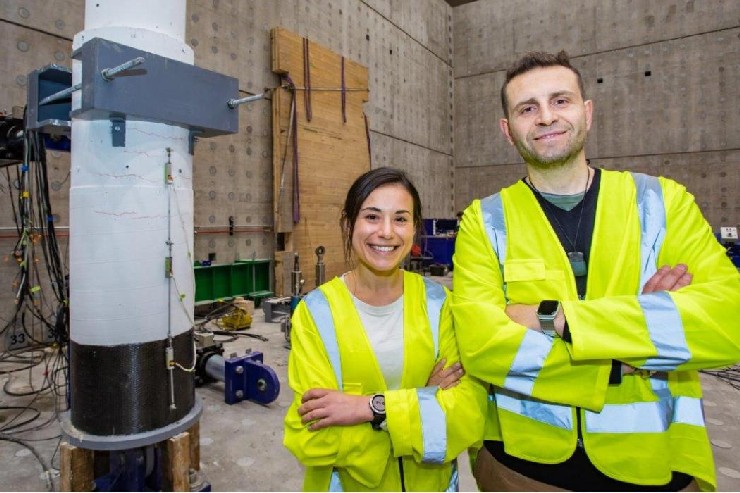 Above: Sabina Piras and Alessandro Palermo

The novelty of the solution stands on its simplicity to build, said Palermo.

Current earthquake design philosophy prevents the collapse of bridge infrastructure as a result of a large-magnitude earthquake, said Palermo, but that does not mean that bridges won’t be significantly damaged. Road closures and repairs can have a significant social and economic impact as seen in the Canterbury and Kaikoura quakes, which brought the affected regions to a standstill and cost the economy millions.

The researchers said that they have developed a solution which, through the combination of self-centring rocking bridge columns, can achieve large displacements with little to no damage compared to conventional bridge columns. A rocking column comprises two main structural components: one or multiple high strength bars that act like rubber bands to re-centre the column, and several conventional steel bars that are detailed to dissipate energy and can be easily replaced if heavily damaged.

“When an earthquake occurs, the column rocks over the foundation,” said Piras. “The joint where the rocking motion happens is designed and detailed such that it can be easily repaired in a very short time. The repair work on the joint could be done over one night closure, preventing major traffic disruption, she said, in comparison to current construction methods that can take months or even years to fix or rebuild.

The 2016 Kaiko¯ura earthquake had a major impact on the transport network with damage, landslides and liquefaction affecting over 900 bridges. After visiting Kaikoura, the researchers understood the need to know how low-damage rocking solutions perform in various soil conditions. “It’s like driving a Ferrari on the road or rough terrain; its performance will not be the same,” says Palermo.

The researchers investigated the influence of different soil types on the low-damage rocking column system and developed a simplified testing technique to simulate the problem.

“The soil we build our infrastructure on varies so much throughout New Zealand, and we must understand how additional soil movements in an earthquake influence the rocking behaviour of our columns,” said Piras.

“The majority of New Zealand bridges are built on single, large-diameter piles that, although big and stiff, are still susceptible to movements in an earthquake,” she said. “Structural bridge researchers have validated the performance of low-damage rocking bridge columns through experimental testing assuming that the foundations are fixed. However, we have recognised that this incorrectly predicts the behaviour of the system, and we are the first to study the influence of soil-foundation-structure interaction on low-damage rocking bridge columns.”