The government of New South Wales in Australia is to introduce new security measures and higher fines in a bid to prevent people from climbing the Sydney Harbour Bridge illegally.

Physical measures including higher fencing, anti-climb mesh and more cameras will be combined with a substantial increase in the maximum fine from about US$2,400 to more than US$16,000. The new figure is the same as the fine for illegally climbing the Sydney Opera House.

The change was sparked by an incident in April that led to the bridge being closed for hours.

“While you can never 100% security proof the bridge, these new measures will go a long way in deterring future attempts," roads minister Melinda Pavey.

People can pay for supervised access to the bridge. It was announced recently that the concession that operates the tours is changing hands (link opens in new tab). 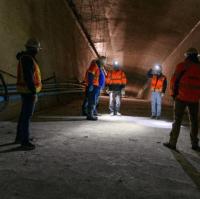 Cleveland's Innerbelt Bridge to be realigned