New Inderhavn Bridge in Copenhagen shows off its movement.

The bridges were to link the new Opera House and the east side of the port to Nyhavn and the main part of the city on the west side. At that stage the only link was provided by water taxis or via a rather convoluted and long route over existing bridges.

The new pedestrian bridges were funded by the AP Møller and Chastine McKinney Møller Foundation, which also funded the new Copenhagen Opera House.

Based on their bridge design track record ten teams were invited from a pool of world-wide expressions of interest. Studio Bednarski/Flint & Neill/Hardesty & Hanover/Speirs & Major team won the main bridge project and completed it in August 2016. The bridge is 250m long in total, spanning the 185m distance between the two quays and has maximum width of 18m.

The width of the harbour was much greater than the width of the navigation channel and this provided just enough room for the steel spans to pull back out of the way when ships pass by. The steel spans, weighing, were made by Vistal in Poland, delivered to Copenhagen by sea in August 2015 and installed by floating crane in just one night. 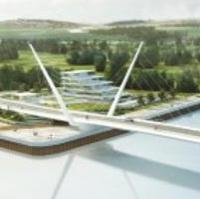