Q&A: Counting the cost of the carbon myth

When it comes to minimising carbon emissions in bridge engineering, there are some widely-held misconceptions that urgently need dispelling, especially in the context of cost. Bd&e speaks with David Collings.

How would you describe the bridge sector’s current position as regards embodied carbon?

A fair amount of lip service currently takes place to the issue of carbon in the bridge industry. I first wrote a paper about this in 2005 and it was starting to get going when the financial crisis of 2007/08 kicked it into touch. However, there is renewed interest and a big push in the building sector driven by organisations such as the Institution of Structural Engineers, with whom I am working. It’s one of our big pushes for 2021, at all levels of Arcadis, to assign specific tasks within the areas of sustainability, carbon and climate change. My part is in the bridge sector, and to a certain extent the challenge is to help people understand the issue and see the benefits.

There has traditionally been a strong belief that reducing carbon has the effect of increasing costs, but the data shows that the more carbon there is, the higher the costs, generally. We are working with HS2 and we found one structure accounted for over half of the total concrete and carbon of our contract.  Value engineering that, in order to reduce the amount of materials, also drastically reduced the carbon footprint of that structure.

Most carbon comes from the materials, so if material quantities are reduced then so are costs. That’s the first message to get across, and that’s what the data shows.

Is there a risk that optimising a bridge design can lower the operational life of an asset?

The optimisation work we have been carrying out doesn’t suggest so. We find is a lot of people design conventional flexural beam and slab wall-type structures in concrete, which are relatively inefficient. If you use an arch structure in concrete, you get something that works much better with a lot less material – and in terms of durability it’s a lot better. Masonry arches have lasted ages and they are in compression, whereas with concrete when you are working it in tension, it cracks. And it’s that crack and the corrosion of the reinforcement that affects things. We are pushing for the concept of the structure to be correct, and that the materials are used correctly, for example if there is going to be a lot of bending in the structure then it’s much better to use a steel girder.

Another example are highway bridges, which we’ve seen crack as a result of corrosion over the past 60 years. Our approach is about getting rid of the problem wherever we can, encouraging the use of integral bridges that get away from joints and bearings, and which will therefore last longer. Lower carbon and durability are not mutually self-exclusive.

Does the link between lower carbon and lower costs extend to construction methods?

It does, particularly in larger bridges, because industrial, repetitive methods are good for carbon. They are generally used anyway because they are relatively low cost and the result tends to be a better, more efficient structure because falsework doesn’t have to be erected for every span.

The issue of excessive carbon emissions tends to arise when bespoke falsework is required, and when it is used once and then effectively scrapped. But in this case the construction method is inefficient.

How are bridges classified in your papers?

We’ve split them into pedestrian, highway and railway bridges, because there are differences there. Highway bridges always have a higher carbon cost than railway and footbridges, because usually they are much wider – 30m against 10-20m for rail bridges, and footbridges are obviously relatively small. There is a huge variation in carbon with footbridges, from very low to some of the highest. But in general terms they are a small part, because even if you double the amount of carbon you are not putting in thousands of tonnes [into the atmosphere] as with the other types.

The next thing we looked at was material, because there is always a debate whether steel, concrete or composite bridges are better or more sustainable. And what we found is that they are pretty similar. There’s a bit more variation in concrete, because it tends to be used on the lower span range, whist all steel tends to be either in the upper span range - orthotropic decks or big bridges of 500m or more - or in small footbridges. Concrete tends to be in the 5-40m span range, followed by steel composites in the middle. What we found is that there’s not much difference, in average.

In terms of bridge type, there is a difference but I’m not sure whether it’s to do with type or span. Suspension bridges tend to have more carbon in them per m2, because they are in the 1,000m or more span range.

We don’t tend to have as many suspension bridges these days, except for long spans. In that area were you could have either suspension or cable-stayed bridges, we find cable-stayed structures are more efficient and have less carbon in them. But as you go down, say to 100m, cable-stayed may not be as efficient as arch or beam structures. It’s all related to structural efficiency and we find where you would use an arch bridge on cost grounds it also makes sense on environmental grounds.

Is there such a thing as a quick win for low-carbon bridge engineering?

One quick win is to think about the specification. The more cement you can get rid of the better, so, for a concrete bridge, specifying a cement replacement is beneficial. People talk about it, but getting rid of 60 or 70% cement can lead to issues around strength gain, which requires changing the specification and the testing regime. So it is necessary to think about it upfront, and not assume that the concrete supplier will do it for you.

The same applies to steel. Often world or European average values of steel carbon are used, but if you know that tubes and rolled sections typically have a high recycled content, you can cut down the amount of carbon per tonne of steel if you replace steel plate with those sections. The carbon content of a tonne of steel tube is probably less than a tonne, while steel plate is nearer to three tonnes. So it’s possible to use a third of carbon if the steel is used efficiently. That sort of information is not out there very clearly, simply because most industry values are average ones, as it is the easiest way of getting data.

What about slower wins?

Flexibility in client understanding the issue is important. Although carbon is becoming something that is considered at the early stages of a project, it would help if processes were in place to allow clients to change their minds and accept lower-carbon alternatives. Often, bad things are locked in during the planning process, whether it be the shape of the structure or the type of bridge, and if it’s in the environmental statement or accepted by the planning authority it is difficult to go back.

Of course carbon is considered in planning at the moment, but it is one of many competing issues and what I’ve been doing is looking at how to move it upwards in the agenda and increasing its perceived value to that it receives a higher weighting in terms of how decisions are made.

Are there any other areas around bridge construction that need to be considered regarding carbon emissions?

One of the things we have to get to grips with is the trade-off between being environmentally sensitive and the extra carbon that doing that requires. Many structures, for example, are accompanied with a specification requiring extra materials to offset environmental damage. As an example, on a recent project there was a requirement to install hundreds of metres of sheet walls to seal a marsh from the construction of a rail bridge. These weren’t old sheet pile wall – they had to be bought specially because of the length of the bridge. That’s a lot of carbon.

David Collings, technical director at consultant Arcadis, has published a number of papers on environmental aspects of bridge and building construction, including ‘An environmental comparison of bridge forms’, Proc. ICE – Bridge Eng., 159 (4), pp. 163–168, and ‘A review of UK greenhouse gas emissions from recent built-environment projects’.

Collings has a wide-ranging experience of major bridge projects, including the BCI Award winning UK-Bangladesh friendship Bridge, a multi-span reinforced concrete cantilever bridge over the Meghna River. He has worked in Kuala Lumpur where he led the teams working on several major bridge and projects including the 17km-long Second Penang Crossing that was awarded the ICE Brunel Prize. 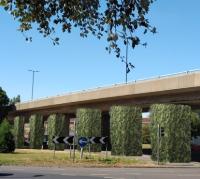 Southampton viaduct to get ‘living’ piers