Removal of the upper bascule section of the Old Sakonnet River Bridge in Rhode Island, US

Video shows the 363t section being cut and then lowered onto a barge using a connected segmental vertical lift system.

After the 65.5m long by 21m wide section had been severed from the rest of the bridge at 12 separate points, it was lowered onto the awaiting barge by the Enerpac jack-up system.

The severely structurally deficient rusting riveted steel box girder bridge had been closed since September 2012 after the Rhode Island Department of Transportation deemed it unsafe.

The process of demolishing the old truss bridge began in March last year. A replacement concrete deck tub-girder bridge opened to the south of the existing structure in October 2012. 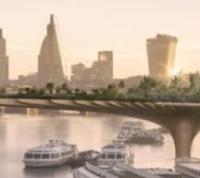