Newly identified bridge forms could enable significantly longer bridge spans to be achieved in the future, according to a paper published this week.

The developments could potentially make it feasible to have a 5km span as part of a crossing over the Strait of Gibraltar, says the paper, published in the Proceedings of the Royal Society. 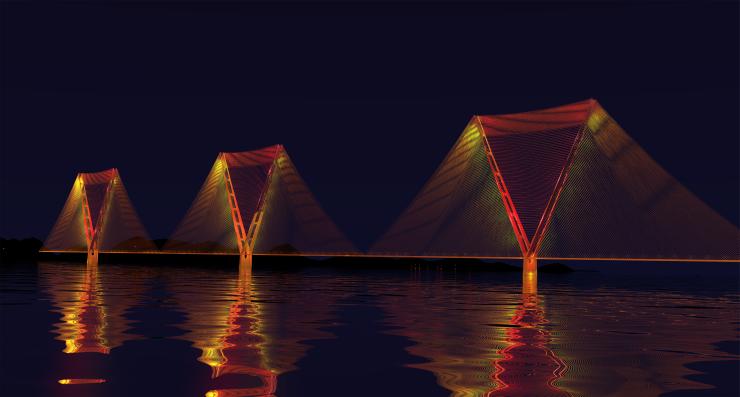 The new bridge forms have been identified by a team of researchers from the University of Sheffield and Brunel University London, working with Ian Firth of consultant Cowi. Their approach uses a new mathematical modelling technique to identify optimal forms for bridges with very long spans.

Professor Matthew Gilbert from the University of Sheffield, who led the research, said: “The suspension bridge has been around for hundreds of years and while we’ve been able to build longer spans through incremental improvements, we’ve never stopped to look to see if it’s actually the best form to use. Our research has shown that more structurally efficient forms do exist, which might open the door to significantly longer bridge spans in the future.”

The mathematically optimal designs contain regions that resemble a bicycle wheel, with multiple ‘spokes’ in place of a single tower. But these would be very difficult to build in practice at large scale. The team therefore replaced these with split towers comprising just two or three ‘spokes’ as a compromise that retains most of the benefit of the optimal designs, while being a little easier to construct.