A study carried out by Stantec Consulting has found that it would not be feasible to add light rail tracks (LRT) to the High Level Bridge in Edmonton, Canada.

The structure would not be strong enough to support the addition of the line.

The city had hoped to use the bridge as the route for a new LRT line and Stantec was commissioned to carry out a concept-level feasibility study and bridge modification strategy assessement for a limited number of potential modifications for multi-modal usage.

The options considered involved widening the footpaths on the lower deck to a 4.2m clear width (option 1); adding two LRT tracks and two shared-use paths on the top decks (option 2); and a combination of the two approaches (option 3).

The High Level Bridge, which opened in 1912, is a relatively complex structure, with two deck levels, numerous span and truss configurations, and a variety of substructure components. There are over 5,000 individual steel members in the structure and a thousand different member sizes and configurations and a long history of modifications.

The load combination of two LRT tracks and a wide shared use path on the upper deck exceeds the total baseline service load for the substructure and superstructure by 26% and over 70% respectively. The load combination, with or without lower deck widening, overloads the substructure such that all land foundations would need to be investigated and strengthened or underpinned. The load combination of LRT and shared use paths on the upper deck, with or without lower deck widening, overloads the superstructure such that about 50% of all the truss members would need to be strengthened or replaced; these options are therefore not feasible.

The report found that option 1 - for lower-level footpaths - was "marginally feasible" but that major structural steel struts would be required. Stantec said that it has significant concerns about the need for localised truss strengthening to support the consequent reactions. 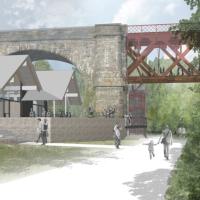