Researchers from the University of Technology Sydney in Australia have developed an application using ground anchors to protect bridges against earthquakes.

The team said that bridges are the most vulnerable parts of a transport network when earthquakes occur, obstructing emergency response, search and rescue missions and the delivery of aid. However, designing against catastrophic earthquakes remains a challenge.

To mitigate the impacts of such major earthquakes, the researchers at the School of Civil & Environmental Engineering at the University of Technology Sydney have a developed an application using ground anchors as the main seismic resisting system for protection of bridges against catastrophic earthquakes.

The new approach can protect bridges against earthquake levels well above code recommendation, according to the team, which is led by associate professor Behzad Fatahi and supported by PhD candidate Mootassem Hassoun.

Fatahi and his team have developed a three-dimensional computer model to simulate and evaluate the seismic capacity of anchored bridges subjected to some of the world's most catastrophic earthquakes. "Our findings prove that bridges restrained with ground anchors have a superior seismic behaviour compared to traditional or even modern bridges with modern seismic protection devices such as viscous dampers," said Fatahi.

This increases the feasibility of producing bridges with much lighter and more economical foundations, the researchers said. It could lead to a reduction in the size and cost of safe bridge construction while maintaining - or even increasing - the capacity of the bridge to sustain significant earthquake motions, they said.

The team tested the solution for many high magnitude earthquakes, including the 1995 Kobe earthquake in Japan, which damaged nearly 400,000 structures. The research indicates that bridges equipped with the ground anchor technology could survive catastrophic earthquakes and remain nearly undamaged while bridges designed using conventional seismic mitigation techniques had collapsed. 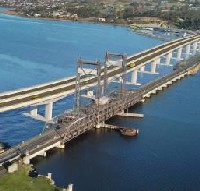