A task force in the US state of Louisiana has recommended the use of a public-private partnership to enable rapid replacement of the Interstate 10/Calcasieu River Bridge.

The recommendations have been made by a task force formed by Chamber Southwest Louisiana (SWLA), a body that represents the business community. The work was aimed at providing Louisiana Department of Transportation and Development (LADOTD) with a detailed action plan under which a private venture could tackle the project without incurring debt or using any tax revenue. The new bridge could be completed within three years with the cooperation of LADOTD, said Chamber SWLA.

“Replacing this bridge has been topic of concern and debate for decades,” said I-10 Bridge Task Force chairperson Keith DuRousseau. “The bridge is vital to the economic fabric of our region and we cannot afford to wait while the state and federal government continue to delay and to allocate funds to projects in other areas. Our research was very eye-opening on the various delays and made us even more determined to find a solution.”

As a result of its research, the I-10 Bridge Task Force concluded that the bridge can only be replaced in a reasonable period of time through public-private partnership.

The recommendation for the design of the bridge calls for a new six-lane bridge with shoulders and a pedestrian walkway, located immediately north of, and parallel to, the existing bridge. The current bridge would remain open while construction of the new bridge takes place.

The task force said that LADOTD’s proposed bridge replacement alternatives are estimated to cost US$800 million in 2018 dollars. The I-10 Bridge Task Force claims that its proposals reduce the cost to between US$400 million and US$600 million and would provide additional ingress and egress.

The task force said that the next step is for it and the Chamber SWLA to work with the SWLA legislative delegation to file any necessary legislation in the upcoming session and to ask the LADOTD and the governor to issue a request for proposal (RFP) for private ventures to design, finance, construct, maintain and concession.

The task force concluded that if the bridge is not replaced in the next five years, Southwest Louisiana, the state and the entire country could suffer drastic commercial and strategic consequences, adding that the cost of doing nothing could result in loss of life, devasting traffic congestion, loss of large scale capital investment and distribution delays. “It’s time to come together once again for the good of our region and ensure that a new I-10 Calcasieu River Bridge is built sooner, rather than later, for the safety and continued prosperity of our region,” says DuRousseau. 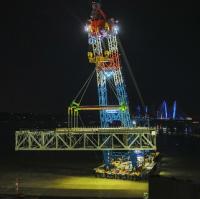