The cause of last week's collapse of a newly installed bridge in Florida is being investigated but meanwhile several of the organisations involved have issued statements.

The bridge collapsed onto a busy highway, killing six people. It happened just a few days after the main span had been installed using accelerated bridge construction techniques (links opens in new tabs).

The statements issued by the parties involved included confirmation that a meeting had been held shortly before the failure, to discuss a crack that had appeared on the bridge. The meeting had concluded that the crack did not compromise safety.

Investigations into the cause of the failure are now under way, led by the USA’s National Transportation Safety Board (NTSB).

A comprehensive overview and commentary covering what is known so far has been published by UK-based bridge designer and blogger ‘The Happy Pontist’ (link opens in new tab). 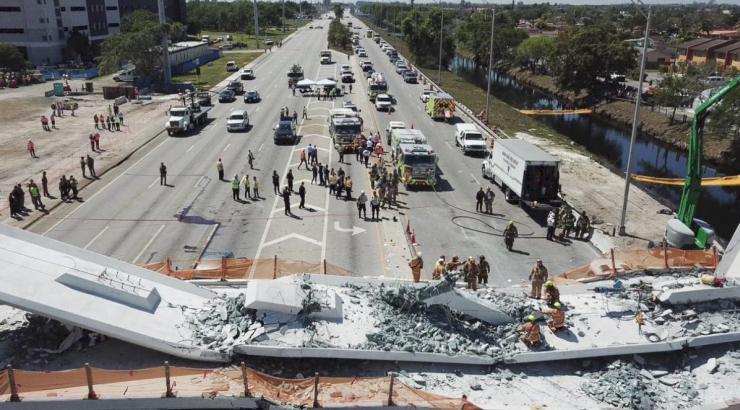 Official comments from those involved include client Florida International University:

“On Thursday morning (March 15, 2018), at 9:00 a.m., the design build team of MCM and Figg, convened a meeting at the MCM trailer, located on the construction site, to discuss a crack that appeared on the structure. The FIGG engineer of record delivered a technical presentation regarding the crack and concluded that there were no safety concerns and the crack did not compromise the structural integrity of the bridge. This meeting lasted approximately two hours and included FIU and FDOT representatives.”

“The investigation is ongoing to determine the collapse of the bridge, and FIU is fully cooperating with all authorities to understand what happened.”

Designer Figg Bridge Engineers said: “We are stunned by the tragic collapse of a pedestrian bridge that was under construction over Southwest Eighth Street in Miami. Our deepest sympathies are with all those affected by this accident. We will fully cooperate with every appropriate authority in reviewing what happened and why. In our 40-year history, nothing like this has ever happened before. Our entire team mourns the loss of life and injuries associated with this devastating tragedy, and our prayers go out to all involved.”

It said that it is the designer of the bridge, working for MCM. The project is part of a US$19.4 million U.S. Department of Transportation Tiger grant, and was bid competitively using design-build procurement by Florida International University.

Figg Bridge Engineers said that it will fully cooperate with every appropriate authority in reviewing what happened and why.

It added: “This is an unprecedented event – no other bridge designed by FIGG Bridge Engineers has ever experienced such a collapse. Figg-designed bridges have proven to be incredibly durable. For example, we have worked on more than 230 bridges throughout the United States and have designed nearly 35 miles of bridges in the southeastern Atlantic and Gulf of Mexico that have withstood multiple hurricanes.”

Miami-based contractor MCM said: “Our family’s thoughts and prayers go out to everyone affected by this terrible tragedy. The new University City Bridge, which was under construction, experienced a catastrophic collapse causing injuries and loss of life.  MCM is a family business and we are all devastated and doing everything we can to assist.   We will conduct a full investigation to determine exactly what went wrong and will cooperate with investigators on scene in every way.”

“Additionally, in the interest of full transparency, FDOT is today releasing the transcript of a voicemail left on a landline on Tuesday, March 13, by W. Denney Pate, FIGG’s lead engineer responsible for the FIU pedestrian bridge project. The transcription is below and audio is available HERE: “Hey Tom, this is Denney Pate with FIGG bridge engineers. Calling to, uh, share with you some information about the FIU pedestrian bridge and some cracking that’s been observed on the north end of the span, the pylon end of that span we moved this weekend. Um, so, uh, we’ve taken a look at it and, uh, obviously some repairs or whatever will have to be done but from a safety perspective we don’t see that there’s any issue there so we’re not concerned about it from that perspective although obviously the cracking is not good and something’s going to have to be, ya know, done to repair that. At any rate, I wanted to chat with you about that because I suspect at some point that’s gonna get to your desk. So, uh, at any rate, call me back when you can. Thank you. Bye.” This voicemail was left on a landline and not heard by an FDOT employee until Friday, March 16 as the employee was out of the office on assignment. When the employee returned to his office today, Friday, March 16, he was able to listen to the voicemail.”

“The tragic failure and collapse of the pedestrian bridge at FIU is the subject of an active and ongoing investigation led by the National Transportation Safety Board (NTSB) as well as local and state law enforcement investigations. As FDOT assists in these investigations, we will continue our internal review and release all pertinent information as quickly as possible while ensuring its accuracy.”

An earlier statement from Florida Department of Transportation had streesed that the bridge was a local agency project, not one of its own schemes. It said that it is currently offering expertise and all necessary resources to local and federal partners and will proactively release all state records related to this project as soon as possible.

It added that, under the terms of the procurement issued by FIU and due to the unique characteristics of the design of the bridge, an independent, secondary design check was required. The statement said: "Under this project, it is the responsibility of FIU’s design build team to select the firm used to conduct the independent, secondary review. The firm selected, Louis Berger, was not FDOT pre-qualified for this service, which is required under FIU’s agreement with the state. FIU’s design build team is responsible for selecting a pre-qualified firm and ensuring this process is followed."

The bridge was to have been completed next year. 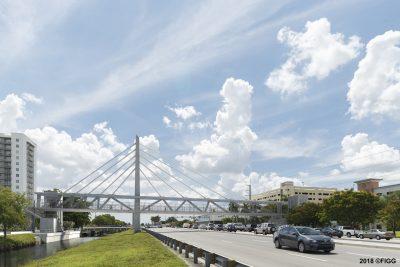