A patent-pending reconfigurable bridge-building gantry which increases speed of erection and span length has been developed for top-down construction, write Alessandro Rovera and Gilberto Dreas.

The preparation of suitable access for construction of foundations and piers is often one of the greatest challenges in bridge construction, and it is one that becomes highly critical in the case of wetlands and areas of high environmental value. Today’s increased sensitivity to the environmental aspects of construction has made the conventional methods for preparation and removal of access less desirable, such as temporary embankments (when operating on land) or channel-dredging when in water. 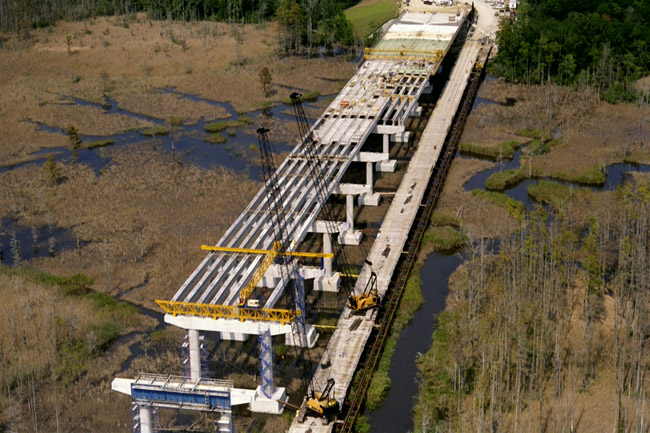 Current construction technology offers three alternatives to these conventional methods. First is the installation (and subsequent removal) of an access trestle that serves as support for conventional foundation equipment. Second is the installation of temporary runway or track upon which a movable platform can carry the required lifting and foundation equipment. Lastly there is top-down construction, first developed by Deal in the 1970s, which consists of self-launching pile-driving equipment able to perform the construction of the entire bridge structure - from piles and columns to the complete deck – using precast components.

Although the first two alternatives outlined above drastically reduce environmental impact when compared to the conventional methods, the effect is still present. Their most significant disadvantages are high cost of temporary structures as well as the possible traffic congestion caused by having a single structure serving all construction activities. The top-down construction method is considered as more environmentally friendly but it has two disadvantages, namely that all its activities are on the critical path (which results in a low construction speed) and the fact that - up to now - it could only be conveniently deployed when using pile-driven foundations.

For several years Deal has been actively working in cooperation with its clients to develop the equipment used in the top-down method to reduce associated construction time and costs. The aim has been to increase overall efficiency and to find a way of making it work for bored piles and, indeed, any type of foundation, whatever the construction method.

As mentioned, the first solution developed by Deal was based on self-launching pile-driving equipment. Operationally, the top-down method is easy to understand when used with driven piles. The precast concrete or steel pile is picked up from the already-erected back span, rotated into a vertical position, then placed on the ground ready for driving. Once pile-driving is completed, prefabricated pile caps and/or crosshead beams can then be likewise picked up and placed, followed by the deck elements – if prefabricated – or the formwork equipment if for a cast-in-situ slab.

With an accurate design that minimises installation and curing time of the connection details between the piles and precast pile cap, this system can enable a very interesting production cycle time. This can reach more than one complete span per week – including piles, piles cap and bridge deck, the latter whether precast or prefabricated.

The pile driver was used in this way during the construction of the Washington Bypass project in the US and the Gran Manglar Project in Colombia (Bd&e issue 88); both projects using precast concrete piles, pile caps, concrete beams and cast-in-place deck slabs.

Notwithstanding the system’s success in these projects, some characteristics of the equipment present an important limitation with spans length above 35-40m. The permanent location at the extremity of the cantilever of the pile lead, the hammer and the rotation system creates a significant bending moment in the main structure, together with very high vertical loads on the supporting pier and/or foundation. The combination of these vertical loads with the horizontal loads due to wind action on main trusses during construction may make its use inadvisable for span lengths above 35m. One solution that was developed in order to mitigate these issues consists of the use of temporary props that are integrated permanently in the structure. Such a solution was applied in the design and fabrication of launching equipment for the construction of a jetty within a new phosphate-handling facility in Port Laayoune in Morocco.

This new spud leg launching gantry is a self-launching steel structure that carries a movable platform, on top of which a conventional crawled crane is installed. The main steel structure is equipped with special spud legs similar to those on jack-up barges that can be engaged at completion of the self-launching. After engaging the spud legs, the movable platform can be conveniently moved forward to handle both the steel piles and the cross-beam. At the front extremity of the launching equipment there is also a piling guide that enables precise positioning during the driving of battered piles. Two spans have so far been completed in Morocco. 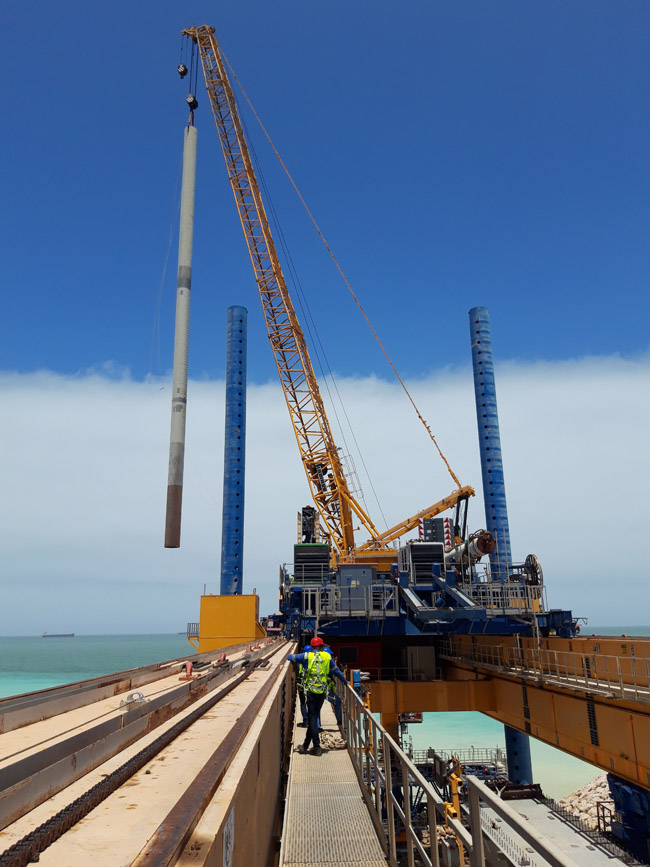 The new spud leg launching gantry is in operation at Port Laayoune, Morocco

The new spud leg launching gantry represents a positive step forward in the evolution of top-down construction technology because it can be used for longer spans, up to 50m in length, and it can easily handle battered piles. However, two things must be noted, firstly that the weight of the crawler crane, with all its required counterweights, represents the governing load in the design of all the equipment. And secondly, the capacity and the possible use of the spud legs depend on the characteristics of the soil, which may not be suitable.

Ground conditions have played a part in the Mozambique LNG Project currently under way, consisting of the construction of an access jetty for an offshore platform. Here, soil characteristics did not allow the use of the spud legs, so all the equipment had necessarily to operate in cantilever. In addition, from the very beginning it was clear that construction loads derived from the conventional method of using a commercial crawler crane for equipment loading would exceed the permanent pile capacity.

The problem has been solved through the development of a so-called derrick-launching gantry. In this system, the conventional crawled crane is replaced by a project-designed derrick crane. The solution allows the counterweights of the crane to be eliminated because the self-launching structure itself acts as counterweight, meaning the crane is fully integrated within the structure. This solution is expected to be deployed in Mozambique before the end of 2022.

The new concept is based on the use of a common set of base components and a set of dedicated accessories that allow the system to be reconfigured for multiple tasks, such as for the drilling of piles where ground conditions are unsuitable for pile-driving and for the erection of different types of superstructures. A fully integrated derrick crane connected by cable stays with the main support frame allows a significant reduction of the dead load of the equipment itself, which leads to an important reduction in the construction loads that are always critical in the top-down construction method. 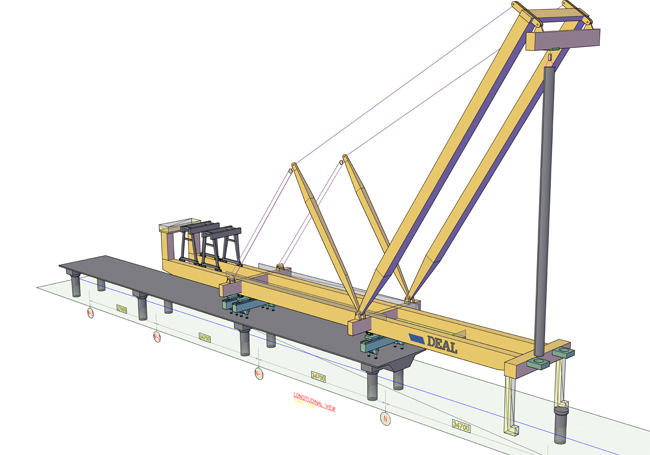 This next-generation equipment reduces most of the constraints that historically limited the efficiency of the top-down construction method. However, as with other industrial-scale construction methods, in order to reach the highest possible efficiency it is essential to approach the design of the permanent structure in close cooperation with the equipment supplier. Only by understanding each other’s needs and constraints can both the designer of the bridge and the designer of the gantry find the most cost-effective and efficient way for the project. The new development has greatly increased our ability to design permanent structures in their entirety, with all details optimised for top-down construction.

There is one last initiative, patent pending, that has been developed specifically to reduce cycle time and efficiency for this new method. As it is evident that the best way of speeding up construction is reducing to a minimum the number of piles as well as the volume of concrete poured, we have developed a solution consisting of precast integrated pier and deck segments that are designed to connect with a pair of piles or piers. Use of this precast element is estimated to enable a cycle time of two spans per week