The governor of the US state of Virginia has announced that agreements have been reached for a US$3.7 billion investment in rail upgrades including construction of a major new bridge.

The agreements reached with rail operators Amtrak, CSX and VRE will enable work to move forward for the construction of the new US$1.9 billion Long Bridge over the Potomac River. A new, Virginia-owned, two-track bridge will be built across the river adjacent to the CSX freight bridge and will be dedicated to passenger and commuter rail.

Governor Ralph Northam said: “We have an unprecedented opportunity to build a 21st century rail system in Virginia and along the entire East Coast. This historic initiative will help get people and goods where they need to go more efficiently, reduce congestion and pollution, and create a more inclusive economy. Together with our partners at Amtrak, CSX, and VRE, we are making critical investments that will fundamentally transform our transportation infrastructure, delivering long-term economic benefits for our workers and communities as we rebound from the pandemic and into the future.”

Senator Mark Warner said: “In order to reduce congestion and travel times for commuters, we need long-term investments in our rail system. That’s why I was proud to have successfully pushed for the December Covid-19 relief package to allow for the construction of a new Long Bridge on the Potomac River, which will double the capacity of the rail crossing right here in the Commonwealth and with our neighbours in Washington, DC.”

Congressman Don Beyer added that the existing Long Bridge is the only rail bridge connecting Virginia to Washington, DC, creating a choke point for rail traffic between the southeast and northeast.

The partnering agreements support the construction of the US$1.9 billion bridge, acquisition of 620km of railway right-of-way and about 360km of track from CSX and an investment of more than US$1 billion in additional infrastructure improvements by Virginia. The investments will allow Virginia to expand Amtrak and VRE services, create a pathway for the separation of freight and passenger and preserve future rail corridors. 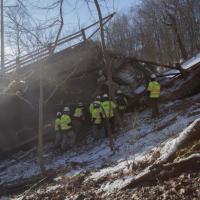