A design by Paris-based engineering and architectural consultancy Marc Mimram has won the competition for the new Bath Quays pedestrian and cycle bridge in western England.

The winning design is called ‘Between History and Modernity’ and was chosen by a panel that included representatives from the fields of bridge engineering and architecture. Feedback showed the Paris-based team’s design was also the public’s favourite.

Judges said they were impressed with the sensitivity of the winning design and particularly inspired by the bridge’s curving design and the unusual undulations of the deck.

Council leader Tim Warren said: “The new bridge is an essential component of the Council’s plans to create a new business district, Bath Quays, in the city’s riverside quarter. A development of the scale of Bath Quays is a fantastic opportunity for Bath to reinvent a somewhat overlooked corner and connect it with the vibrant and beautiful historic city.”

Marc Mimram, founding director of Marc Mimram Architects & Engineers, said: “I have built bridges all over the world but it has long been my ambition to build in the UK and I’m excited to be doing so in Bath. The city’s history and relationship with the River Avon has captivated me since my first visit and it was this that inspired our design for the bridge.

“Bridges have the capacity to transform cities, to build not just physical ties between locations, but symbolic bonds within communities. While being firmly rooted in Bath’s history and landscape this bridge connects Bath’s two new business districts and allows the city to look forwards towards future growth and transformation.”

The Council intends to submit a planning application for the new bridge during 2016 with a view to construction taking place during 2017. 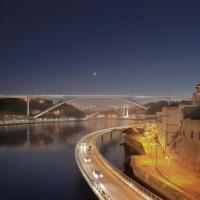