Allplan Bridge 2020 offers the ability to derive an analytical model automatically from a physical model by using a common bridge model instead of two separate ones for structural analysis and detailing. This means that when a model is modified, so too are all of the associated bridge elements, including the analytical model. The result is a faster and more accurate bridge design where the engineer maintains complete control, for instance by specifying structural parts and those ones that contribute as load only. 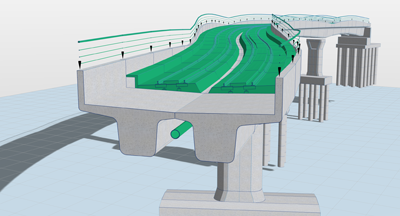 Drive loads are automatically calculated from the geometrical model

The latest release also features 4D BIM, which Allplan says can not only analyse a construction schedule, but also automatically perform calculation definitions for calculating nonlinear time effects such as creep, shrinkage and relaxation. Other improvements include the ability to assimilate automatically from the geometric model the position and weight of dead loads such as sidewalks and road pavement. 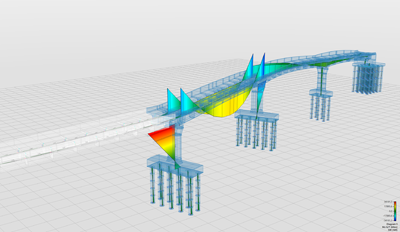 Much effort has also gone into the user-friendliness of the superposition in Allplan Bridge, says the company, with the aim of combining flexibility with the best overview possible within the schematic definition. As a result, the software enables several stress components to be selected in user-defined stress points and a stress leading superposition performed, with results stored for selected elements.

All automatic and manual calculations in the construction sequence definitions are subjected to an automatic global static analysis based on the Bernoulli beam theory, and further enhanced by considering cross-section variation. Nonlinear calculations of time-dependent effects are carried out according to design code formulas.

Wildlife bridge opens in The Netherlands