Arrests made as part of Genoa bridge collapse probe

A number of arrests have been made in connection with information that has emerged during the investigation into last year’s fatal collapse of the Morandi Bridge in Genoa, Italy.

The police investigating the collapse, in which 43 people died, allege that safety reports have been falsified relating to the Pecetti and Paolillo viaducts on the A26 and A16 motorways, respectively.

Three people have been placed under house arrest and six temporarily barred from working.

The steps have been taken against executives and technicians from Autostrade per l'Italia and SPEA Engineering. Offices of the subjects have also been searched.

A statement from the Guardia di Finanza said that the actions relate to the emergence of evidence regarding possible falsification and omissions in connection with the other motorway viaducts, aimed at hiding the condition of the structures from government inspectors. 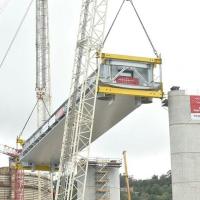