Guest blog from Bridges to Prosperity – Post #4, by Nico Turrini

On this occasion, however, we are in Rwanda, in the depth of the Nyanza district, where the residents of the Cyarera, Gatongati and Masangano communities have been struggling to cross the immense valley carved by the Mwogo river for as long as they can remember. Building a resilient vehicular bridge is simply impossible in this place without investing millions of dollars, leaving the people living in the surrounding areas without a crossing point – until now. This immense need for a link made three main things happen:

The Cyarera valley captured during construction

The Cyarera Suspension Bridge and its challenges

In order to give adequate protection to the foundations of the bridge from flooding water and potential riverbed displacements, a span of no less than 150m was required across the valley. Such a long span extends beyond Bridges to Prosperity’s standard design and called for customisation, which greatly increased the cost of the bridge as highlighted. The primary reason for this is the requirement for the lateral wind-guy system, which comprise four extra concrete anchor blocks and two 200m-long wind-guy cables to brace the structure against lateral actions and stabilise the walkway, allowing users to have a better experience while crossing.

Big rivers are just not friendly

Once the works started, our construction team encountered the first logistical problem: due to the great width and depth of the river, it was not possible to build a temporary timber bridge to serve the community and our own team while building the main bridge, which is the typical solution at our sites. This forced the team to start working on just the western side of the river, moving to the other side when that substructure was completed.

For the Cyarera bridge in particular, a set of 11m-tall towers was needed (1.5m taller with respect to the tallest standard tower used in our typical designs). The increased length and thickness of the main tower pipes created issues when transporting them by foot along the steep slopes of the Mwogo river valley. It also slowed the process of positioning and assembling the towers on the pedestals.

Moreover, the increased weight with respect to the standard values forced the engineering team to increase the dimensions of structural elements such as pedestals and footings; everything became bigger. The tower lifting process, which requires a winch to be connected to a concrete cubic anchor cast in the ground on the opposite side of each tower, was another feature which was suddenly more complex with heavier towers involved. This complexity was ultimately overcome by pouring a bigger concrete block to anchor the winch used for the lift and by using a longer lifting cable to cover the wider valley.

Positioning, painting and assembling of one of the two 11m-tall steel towers

The bigger the bridge, the longer the cables

The extreme length of the main wire-rope cables for this bridge, which measured more than 200m each, was coupled with a larger number of them: eight in total, including the two wind-guy cables, compared to four on a typical B2P bridge. It was an immense challenge to find cables measuring at least 200m with no imperfections among the available spools of re-used wire rope cable donated by international ports. Our quality assurance team really put in the extra hours into the calendar to make sure the cables could be found and made ready by the start of the substructure works.

In addition, transferring such long cables across the river involved the entirety of the work force, with all workers distributed along the length of the cable across the valley in order to lay it along the “bridge line”, from anchor to anchor.

Construction workers transporting and installing cables across the Mwogo valley

I still remember the alarm clock going off at 5:00am five years ago in Nicarauga. Yes, the major constraint involved in wind-guy cable installation was time. Falling within the superstructure phase of construction, the installation of the wind guys was set to take place during the final two weeks of construction with the support of the 15 corporate volunteers and local workforce. This created a lot of extra technical tasks for the B2P team and the volunteers, forcing all of them to wake up at 5:00am every morning (just like I did!) in order to reach the site as early as 6:30AM and work until 5:00pm every single day, including the weekend, when they would typically have time to rest.

I did not participate directly in the construction of the Cyarera bridge, but I decided to visit it during the inauguration day, the happiest day of any bridge.

Wow! This huge bridge is incredibly beautiful. In addition to being a small engineering wonder, the harmonic lines traced by the walkway and the wind-guy cable system almost 10m above the ground seem to just naturally fit the landscape of the Mwogo Valley.

Closer to the ground, the sense of pride and the pure happiness of all the parties involved in its construction was tangible. The district mayor, speaking proudly about the other bridges to be built by B2P in Nyanza this year, referred to the new Cyarera crossing as an example of excellence.

The bridge when it opened to the public

The community, gathered on both sides of the river, waited to cross the steel walkway which they built themselves while dancing and screaming joyfully throughout the morning.

Members of the community celebrating during the inauguration day

The corporate team, who despite their lack of residual energy after two weeks of intense hands-on work, could still smile and enjoy the result of their efforts.

Corporate volunteers on the completed bridge

But let’s not forget that B2P is made up of people, by a huge team and many different departments, all of which played an essential role in the completion of the longest suspension bridge built by the organisation so far. And while I was there, I could not help take a team selfie to immortalise that magical day!

This year, more than 20 corporate teams of volunteers, from international construction and engineering firms who sponsor our work, jumped on a plane to build bridges with us in East Africa, and many more are set to travel in the coming months. Get in touch today to find out how you and your company can join the B2P corporate family and book your travel spot for the next construction season!

If you would like to learn more about Bridges to Prosperity and follow our work in East Africa and beyond, here are some useful links: 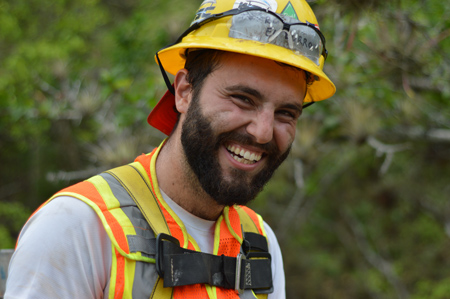