Councillors in Modesto in the US state of California are set to discuss a proposal that the city's 7th Street Bridge should be replaced with a precast concrete crossing.

The 14 February meeting of Modesto councillors will consider a resolution that says that maintenance of the bridge is no longer feasible; a preferred solution has been put forward.

The 14-span cantilevered concrete arch bridge was built a century ago and is believed to be one of the last survivors of its type, though has suffered considerable deterioration. The project to repair or replace the structure is a joint initiative between Modesto and the county of Stanislaus.

The preferred alternative would use the existing 7th Street Bridge alignment as part of the new bridge route. The existing bridge would be closed for construction of the new crossing. A proposal for the replacement to be a tied arch bridge was not selected as the preferred solution for reasons of cost efficiency; a more standard structure has been recommended. Precast concrete girders would be used for the entire superstructure, making it the lowest cost alternative under consideration. There would be seven piers, including one in the low-flow channel of the river.

The proposal also includes provision of an "interpretive plaza" to preserve historic and aesthetic features of the existing bridge. 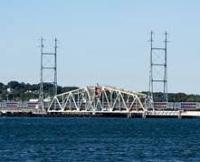