A consulting firm that has been barred from participating in federally funding projects in the USA is seeking to have the decision overturned.

On 14 July 2020, the Federal Highway Administration (FHWA) issued a notice of suspension and proposal to debar Figg Bridge Engineers, Inc and one of its engineers, William Denney Pate, in connection with the Florida International University pedestrian bridge project. Six people died when the bridge collapsed during construction in March 2018.

Figg Bridge Engineers, Inc and William Denney Pate have filed a court application against the FHWA. They are seeking a temporary restraining order and preliminary injunction lifting FHWA’s decision to suspend them from participating in any federally-funded government programmes or contracts.

The 35-page document filed with court say that the harm to the plaintiffs is so imminent and great that they stand to lose an existing contract that provides almost half of Figg’s revenue.

The court document says: “Despite the undisputed facts that there were more than forty different parties involved in the construction, management and inspection of the FIU Bridge project and, as a matter of law, Plaintiffs were not the party responsible for site safety, construction or inspection, Plaintiffs are the only parties that the FHWA has suspended and proposed to debar as a result of the accident.

“These facts, in addition to the FHWA’s failure to substantiate its findings, conduct any of its own factfinding or consider the responsibility of any other party before imposing such draconian and punitive measures against Plaintiffs, reflect that the Agency is simply looking for someone to blame for the FIU Bridge collapse without fairly reviewing the substantial technical engineering evidence that Plaintiffs have offered to it.” 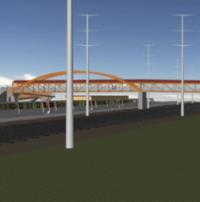