Waka Kotahi New Zealand Transport Agency has announced its preferred bidder to plan and design the next phases of the Waitemata Harbour Connections project.

Waka Kotahi and partners Auckland Transport and Auckland Council have named an alliance of four companies - WSP, Beca, Systra and Cox Architecture - as its preferred bidder for the next phase of the project, whose scope ncludes determining future use of the Auckland Harbour Bridge.

The agency also announced an alliance of Aurecon and Arup as the preferred bidder for the Auckland Light Rail (ALR) project.

While ALR and the Waitemata Harbour Connections are separate projects, together they underpin expansion of a rapid transit system better connecting road, rail, bus, walking and cycling links.

“Advancing a modern and world-class rapid transit system and transforming the way Aucklanders get around their city including crossing the Waitemata Harbour, has attracted two outstanding teams with significant national and international experience,” said a joint statement from Waka Kotahi NZ Transport Agency and Auckland Light Rail. “Appointing the preferred bidders marks a big step forward to deliver two vitally important projects our city needs to sustainably grow and prosper.”

Both alliances are responsible for the planning and design of their respective projects, which are at different phases of development.

Waitemata Harbour Connections will investigate connections for all modes, to shape the future of the city, the region and beyond, said Brett Gliddon, Waka Kotahi transport services general manager. “This will also help to address climate change issues by providing more transport choices and making Auckland’s transport system more resilient and reliable.”

He added: “By mid next year, Waitemata Harbour Connections team plans to deliver a recommendation for a package of transport improvements as part of a Waitemata Harbour connections indicative business case. This will encompass all modes including light rail, buses, connections for walking and cycling, vehicles and freight, along with determining the future use of the Auckland Harbour Bridge. These long-term solutions will require significant investment and involve complex large-scale construction, anticipated to take more than 15 years of design and construction work.”

Both alliances were named preferred bidders after a competitive and independent tender process involving New Zealand and international companies. 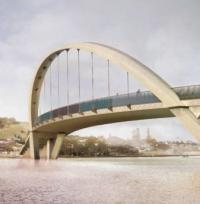