Emergency repair contracts with a total value of more than US$9 million have been ratified to safeguard the Delaware River Turnpike Bridge in the USA.

Members of the New Jersey Turnpike Authority formally approved the contracts this week, although the work had already been awarded as urgent action was needed when the problems were found last month.

The bridge carries the I-95 across the Delaware River, linking the New Jersey Turnpike to the Pennsylvania Turnpike. On 20 January, it was discovered that a critical structural steel member of a four span continuous deck truss on the Delaware River Turnpike Bridge had completely cracked and separated (link opens in new tab). The structure was deemed to be in a severely compromised state and New Jersey Turnpike Authority and the Pennsylvania Turnpike Commission closed it all vehicular traffic.

Moretrench American Corporation has been awarded a US$3.5 million contract for the construction of micropile foundations at eight locations. The foundations will support temporary towers to support and stabilise the bridge. 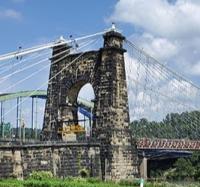