The competition to design an opening bridge in Gdansk has been won by Studio Bednarski and Schlaich Bergermann Partner, from a field of seven invited teams. 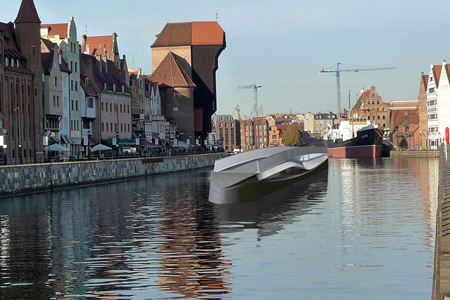 The competition for design of the bridge across the Motlawa River was launched last year by the Gdansk city authority, with its strategic partners for the development of Spichrzowa Island, Multibud W Ciurzynski and Immobel Poland. The site is next to Europe’s oldest surviving port crane, which dates from 1444.

The 50m-long bridge is a part of development planning gain and will provide essential access to the Island, one of the very few ruins left from the time of WW2 in Europe. The bridge will link the new development with the old town, creating not only a new access route but also a destination in itself.

The main objective was the creation of a functional work of art, which emerges as a water-based sculpture when the bridge deck is opened for navigation, and protects the deck from ship impact. 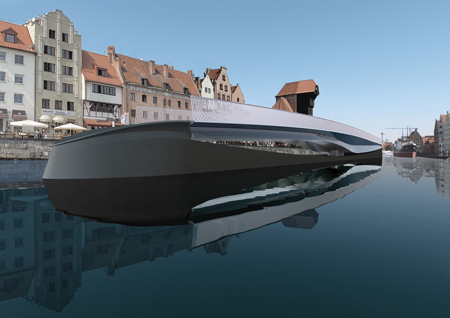 Cezary Bednarski commented: “The massive, eminently logical and functional form of the Gdansk port crane facilitated vertical movement and speaks of the times when it was built. Our horizontally revolving bridge takes up this dialogue as a delicate horizontal counterpoint to the crane’s mass and verticality. Our aim was to align the design of the new bridge with the dynamics of the city, endowing it with unequivocal and explicit identity, all born exclusively of its functionality and structure, without any decorations. Drawing from the Baltic traditions we sought to optimise functionality not letting the bridge become a manifestation of an extravagant structural form.” 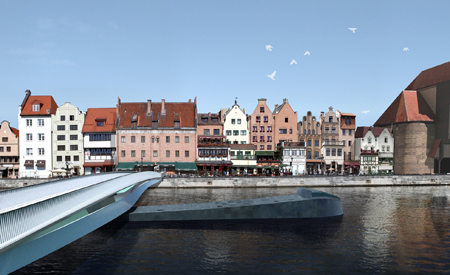