The Golden Gate Bridge’s venture into singing is set to end as its owner has come up with a way of eliminating the wind-induced sounds.

The Golden Gate Bridge District’s directors will be asked this week to approve the proposed solution and associated actions.

In the spring of 2020, the district became aware of sounds coming from the Golden Gate Bridge during high winds (link opens in new tab).

After extensive analysis and testing, the district has developed what it said is a cost-effective measure that will eliminate many of the wind-induced sounds altogether and make most remaining sounds inaudible. Tones may still be audible at the bridge during rare instances of very specific and severe wind conditions, it said. However, the proposed solution was shown to reduce those sounds by 75% compared to railings without the solution installed. Any remaining sounds are expected to be faint or inaudible in residential areas near the Bridge and occur only several times per year, on average, it said.

The district said that the proposed solution will be invisible to most bridge users and will not affect the bridge’s structural stability during sustained high winds. Installation is expected to be complete by the end of 2022.

The solution, designed by district engineers and leading bridge aerodynamics and acoustics experts, calls for installation of thin, u-shaped clips attached to both edges of all 12,000 vertical slats on the newly installed west railing. The clips, which are about 3mm thick, will cover the edge of every slat from top to bottom and will include a thin rubber sleeve underneath to dampen vibrations that contribute to the sounds. 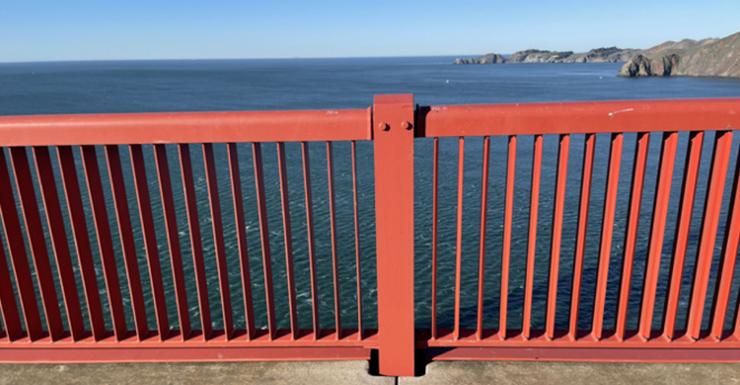 Above:  Slats without clips are on the left and slats with clips installed are shown on the right

The clips will be painted in the Golden Gate Bridge’s famous ‘International Orange’, making them invisible to most bridge users. This design has been reviewed by architectural preservation experts who have confirmed that the clips will have no impact on the bridge’s appearance.

The u-shaped clips work to reduce or eliminate sounds by lightly disrupting the flow of air as it passes over each slat, minimizing vortex shedding. By disrupting airflow, the u-shaped clips and rubber sleeves greatly reduce the vibrations in both the air and slats, thereby eliminating or reducing the sounds to mostly inaudible levels.

The estimated cost to fabricate the clips and rubber inserts for the 12,000 affected slats is US$450,000. Funding will come from the bridge operating budget and will not require any additional revenue measures. Installation of the clips and inserts will be performed by Bridge staff as part of their regular maintenance activities. Installation is expected to be complete by the end of 2022.

In a wind tunnel, engineers were able to recreate the noise in a controlled environment, allowing them to pinpoint the mechanism of railing and wind interaction that creates the sound. Through these tests, we learned that there are two distinct sounds that occur under different wind conditions.

The first sound is a low-pitched and low-frequency tone (between 280-700Hz) that is present when wind passes perpendicularly to the railing (from the west) at wind speeds of 35km/h or more. This lower-frequency tone is often heard furthest away from the bridge. The second tone present during certain high winds is of a higher pitch and frequency (1.1kHz) and is present when wind passes the railing at a slight angle and with speeds of 43km/h or more.

After extensive testing of various potential measures, the u-shaped clips with a thin rubber insert were found to perform the best at reducing or eliminating both tones without affecting the effectiveness of the new railing. The clip design was tested further in a wind tunnel under 110 different combinations of wind speed and direction, where it was shown to eliminate or make inaudible the sounds in all but two very specific and severe wind scenarios

In summer 2021, musician Nate Mercereau took the annoying hum and turned it into four instrumental ‘duets’ with the bridge. 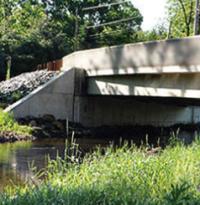 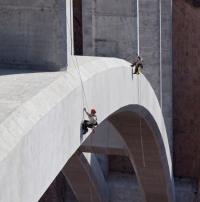