Denmark’s roads authority has named the winning contracting joint venture for the US$332 million Storstrøm Bridge.

The team is made up of Itinera, Condotte and Grandi Lavori Fincosit, with Seteco Ingegneria as consultant. Danish company EKJ Rådgivende Ingeniører is also working with the team.

Storstrøm Bridge  - Storstrømsbroen in Danish – will connect Zealand with Falster via Masnedø. The bridge, which has been designed by Dissing & Weitling, will carry both rail and road, as well as making provision for pedestrians and cyclists. It will be 4km in length, with a central cable-stayed section.

The project forms part of the upgrading of the railway line between Copenhagen and Rødby and on to the Fehmarnbelt Tunnel, which will link Denmark and Germany.

The total price for the bridge project, including demolition of the existing Storstrømsbro, is approximately US$649 million.

The client’s project manager welcomed the high quality of the four tenderers and the winner's proposal. "We are very excited to see the great international attention Storstrømsbroen has had throughout the process,” said Niels Gottlieb of the Danish Road Directorate, Vejdireektoratet. “This is also reflected in the four joint ventures that have bid for the task. They are all highly qualified with years of international experience and successful projects behind them. The winning joint venture, however, delivered the best project based on price and quality, so the choice fell on them.”

Vejdireektoratet expects to sign a contract with the winner before the end of the year, with construction of the bridge starting in autumn 2018. The bridge is expected to be ready for car traffic in 2022 and rail traffic in 2023.

Wuhu road and rail bridge completed ahead of schedule 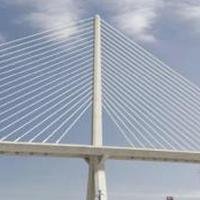