Mumbai Metropolitan Region Development Authority (MMRDA) said that the second of the sections was launched this week following completion of the first launch in April.

In total, 38 orthotropic steel deck sections are to be erected within the first phase of the project. The week’s, which was the 14th to be launched, is 180m long and weighs 2400t.

MMRDA metropolitan commissioner Shri Srinivas said that the launch meant that a significant milestone had been reached. He added that the construction teams are moving in sync with a catch-up plan aimed at commissioning the project by the end of next year. 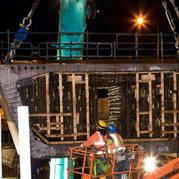