The major US$170 million contract on the Mulheimer Bridge over the Rhine in Cologne, Germany will be carried out with the bridge kept open to traffic.

The City of Cologne’s Office for Bridges, Tunnels and City Rail has signed a contract with Implenia for the work, which will be carried out over a four year period.

The bridge across the Rhine was built in 1951 and consists of four individual structures that will be either rebuilt or repaired and strengthened. The bridge is around a kilometre long, and carries four lanes of traffic plus extra lanes for local public transport. Two of the four bridge structures – the Deichbrücke and the ramp on the right bank of the Rhine – are being demolished and rebuilt. The other structures – the Strombrücke and the Flutbrücke – are being repaired and reinforced. The contract also includes resurfacing the road and footpaths, constructing new drainage facilities and replacing the suspension cables. The work should be finished by 2022. Traffic will continue to use the bridge throughout the entire construction period. 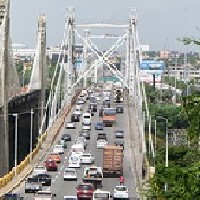