Public meetings are set to take place this week in the US states of Indiana and Kentucky to outline preliminary options for a new bridge costing almost US$1.5 billion.

The project team for the I-69 Ohio River Crossing has developed preliminary alternatives for each of three corridors being considered for the new bridge and its connections.

Latest engineering analyses have found that three options - West Alternative 1, West Alternative 2 and Central Alternative 1 - provide the best opportunity to be financially feasible and address the purpose and need of the project. Estimated costs range from US$1.42 billion to US$1.49 billion.

West Alternative 1 includes a four-lane I-69 bridge and retains one US 41 bridge for local traffic. It includes a reconstructed US 60 interchange as well as new interchanges. The preliminary estimated cost is US$1.47 billion.

West Alternative 2 includes a six-lane I-69 bridge and removes both US 41 bridges from service. It too includes reconstructed and new interchanges. Its preliminary estimated cost is US$1.49 billion.

Central Alternative 1 includes a four-lane I-69 bridge and retains one US 41 bridge for local traffic. It includes three new interchanges and the option's preliminary estimated cost is US$1.42 billion.

Indiana completed a draft environmental impact statement in 2004, but with no funding source, the project stalled with no record of decision. Kentucky also conducted a feasibility study in 2014. In 2016, the governors of the two states signed a memorandum of agreement, committing funding to advance project development. The states have reinitiated the study of the corridor to complete a required federal environmental review.

A preferred alternative is expected to be identified by autumn this year. 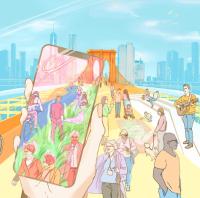