A bridge that incorporates a record-breaking concrete tower opened to traffic this week in China’s Guizhou province.

The cable-supported Pingtang Bridge, which runs for 2,135m across a canyon, features what is claimed to be the world’s tallest concrete bridge tower. The central tower has a height of 332m, making it as tall as a 110-storey building.

Guizhou province announced the completion of the bridge and said that a total of about US$215m was invested into its construction.

The opening of the bridge will reduce the travel time between Pingtang and Luodian from over two and a half hours to about one hour, and will help alleviate poverty alleviation in the region. 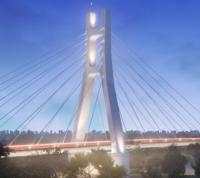