The latest edition of an annual report into the state of US bridges says that 36% need repair work and that 78,800 should be replaced.

More than 43,500 bridges are rated in poor condition and classified as ‘structurally deficient’, according to the analysis by Dr Alison Premo Black, chief economist at the American Road & Transportation Builders Association (ARTBA). The analysis is based on information downloaded from the US Department of Transportation’s National Bridge Inventory (NBI) database on 3 January 2022.

The number of structurally deficient bridges declined by 1,445 compared to 2020. However, at the current pace, it would take nearly 30 years to repair them all, says the report.

The report has been published the same week that a bridge collapsed in Pittsburgh while a number of vehicles were crossing it (link opens in new tab).

New federal investment under the Infrastructure Investment & Jobs Act will provide additional resources for state highway programmes over the next five years, plus two new programmes just for bridge repair.

ARTBA estimates the cost of identified repairs for all 224,000 bridges, including the 43,578 that are structurally deficient, is US$260bn. Its calculations are based on average repair and replacement cost data published by the Federal Highway Administration (FHWA) and submitted by bridge owners.

Structurally deficient bridges represent 7% of the 2021 U.S. bridge inventory—compared to 7.3% in 2020, says the report.

Under a new IIJA bridge formula programme, the US Department of Transportation (USDOT) announced in January that it would disburse more than US$27.5bn to states for bridge repairs over the next five years. Another new IIJA-created discretionary bridge programme, which will be administered by the USDOT, will provide US$12.5bn for projects that will be awarded through to 2026.

State DOTs can also use federal highway fund schemes, such as the National Highway Performance Program and the Surface Transportation Block Grant Program, for bridge improvements. The total for all state-focused formula programmes is expected to increase from US$45bn in the 2021 financial year to US$59bn in 2022. 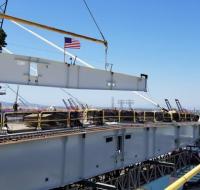