A highway bridge collapsed on Friday in Pittsburgh, USA, just hours before president Joe Biden was due to give a speech on the importance of funding for infrastructure.

No one was seriously injured, even though five vehicles and one Port Authority bus were on the Forbes Avenue Bridge in Frick Park at the time. Ten people were evaluated and treated for minor injuries, including some first responders. Three people were transported to local hospitals with non-life-threatening injuries. 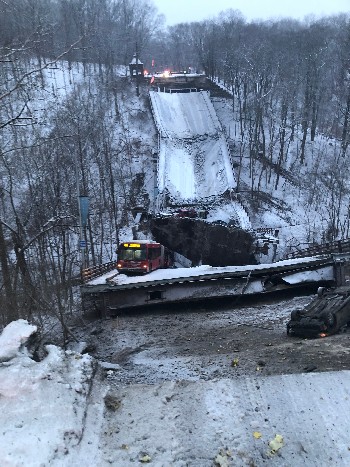 The cause of the collapse is under investigation.

The collapse came just hours before president Joe Biden was scheduled to give a talk in the city on the importance of infrastructure maintenance. Shortly after the collapse, Biden gave his speech, which he updated to make reference to the bridge.  He said that it had been rated in “poor” condition for the past 10 years and that there are another 3,300 bridges in Pennsylvania. Some of these are just as old and in just as decrepit condition as that bridge was, he said, including ones "here in Pittsburgh, the ‘City of Bridges’".

Across the country, there are 45,000 bridges in “poor” condition. “It’s just simply unacceptable,” said Biden. “I’ve talked about it every time I’ve come to Pittsburgh, and we finally got it done: a Bipartisan Infrastructure Law, including the largest investment in our nation’s bridges since Eisenhower put together the Interstate Highway System.”

In Pennsylvania, that means at least US$1.6bn for bridges alone, including US$327m for bridge repairs, he said.

“We’ve got to get on with it,” he said. “We’ve got to move.  The next time, we don’t need headlines saying that someone was killed when the next bridge collapses.”

Biden said that when a bridge is in disrepair, “it literally can threaten lives”. He added: “And we’re going to rebuild that bridge, along with thousands of other bridges in Pennsylvania and across the country, because it’s in our interest for our own safety’s sake and it generates commerce in a way that we can’t do now.” 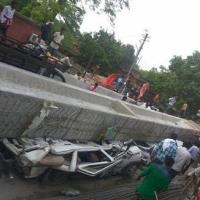