A study of efforts undertaken 20 years ago to mitigate corrosion of a reinforced concrete highway bridge has given researchers insights into the long-term effectiveness of different measures.

Work had been carried out two decades ago to mitigate corrosion of the bridge on Highway 394 in Minnesota, USA. The Minnesota Department of Transportation (MnDOT) Bridge Office needed to evaluate how well the treatments had performed. The study findings are mixed: state-of-the-art methods for electrochemical chloride extraction and fibre-reinforced polymer wrapping of bridge elements performed well in combination, but poorly in isolation.

In 1998, researchers tested several corrosion mitigation strategies on the support piers of the bridge, which was built in 1970 over Dunwoody Boulevard west of downtown Minneapolis. Researchers evaluated five piers - each with three columns and a pier cap - treated with electrochemical chloride extraction (ECE), a fairly new option in the late 1990s; various coatings and conventional repairs; and fibre-reinforced polymer (FRP) wraps.

“These were new technologies at the time,” said Mark Chauvin, associate principal, Wiss, Janney, Elstner Associates. “This was a unique opportunity to evaluate actual performance after 20 years of service in our environment. Results were mixed, but not surprising.” 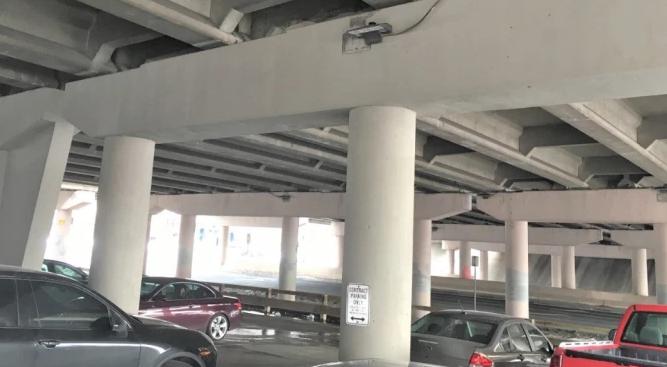 Investigators, led by a researcher involved in the 1998 study, generally repeated the inspection and testing strategy employed 20 years earlier. Using data from both 1998 and 2018, researchers compared mapped deterioration, embedded chloride levels and other corrosion indicators.

Together, ECE and FRP wrap worked very well in arresting 1998 chloride-related damage and resisting new corrosion-related deterioration. None of the other treatment combinations or individual applications of ECE or FRP wrap performed as well.

The greatest recurrence of distress occurred in sections that received ECE followed by penetrating sealers, which performed comparably to control areas that received no ECE, FRP or surface-protecting treatment. Exposure to new moisture appeared to influence repair longevity more than any specific treatment approach.

Chloride reductions were not apparently sustained where chloride exposure persisted. All piers showed significant increases in chloride contamination over 20 years, indicating that wraps and sealers alone did not prevent chloride infiltration for extended periods. Although ECE achieved significant and immediate chloride reductions in 1998, chloride levels exceeded pretreatment levels almost uniformly by 2018, regardless of wraps and sealants used.

FRP wraps did not effectively waterproof treated elements, and they inhibited visual inspection. Where FRP was used over repairs or chloride-contaminated concrete, new distress behind wrap exposed to significant moisture was identified by hammer sounding, a technique not routinely performed during inspections.

“The chloride treatment done in 1998 was successful at first, but now the chloride levels are high again. The biggest lesson was to try to keep the leak sources, the joints, in good condition,” said Paul Pilarski, bridge construction and scoping engineer, MnDOT Bridge Office.

Conventional concrete repair treatments showed a high distress recurrence rate, but appeared to be the most cost-effective approaches for 1998. Though combining ECE and FRP was the most successful approach, it was also the most expensive. ECE treatment also requires long-term access that is impractical for areas where traffic cannot be diverted for several weeks.

The study confirmed that the best approach to corrosion mitigation is to minimise water and chloride exposure through maintenance and routine repair of deck joints and drainage systems. Chloride contamination levels found at this site exceeded thresholds at which corrosion is traditionally seen.

Distress areas found in 2018 will be repaired in spring 2020. FRP wrap will be removed and concrete distress and steel corrosion will be identified, allowing evaluation of the impact of FRP wrap and corrosion expectations predicted by current chloride guidance. 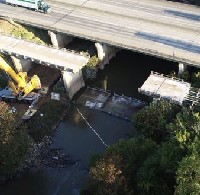