Work gets under way for new American Legion Bridge

Predevelopment work is set to begin for the new American Legion Bridge in Maryland, USA.

Maryland Board of Public Works has approved an agreement that clears the way for the predevelopment work prior to final design and construction.

In February, Accelerate Maryland Partners, which is led by Transurban and Macquarie Capital, was selected for the project by Maryland Department of Transportation (MDOT) and Maryland Transportation Authority (MDTA). Two other teams had also competed for the public-private partnership project (link opens in new tab).

In addition to the bridge, the scheme includes 60km of express lanes transit improvements and new bicycle and pedestrian connections.

Predevelopment work will progress in coordination with the ongoing National Environmental Policy Act (NEPA) review process, which is expected to be completed in the second half of 2022.

Accelerate Maryland Partners is also progressing a competitive solicitation for a design and construction partner and released a request for qualifications (RFQ) in late July. 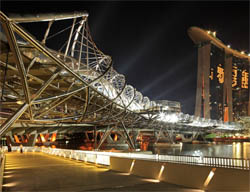